Unlimited budget- Hotels Near Busch Stadium (all are within walking distance)

Hilton- St. Louis at the Ballpark

Inquire about their "Grand Slam Ticket Packages". Each package includes a room with an unmatched view of Busch Stadium, a baseball themed souvenir, and two or four tickets to a Cardinals game. 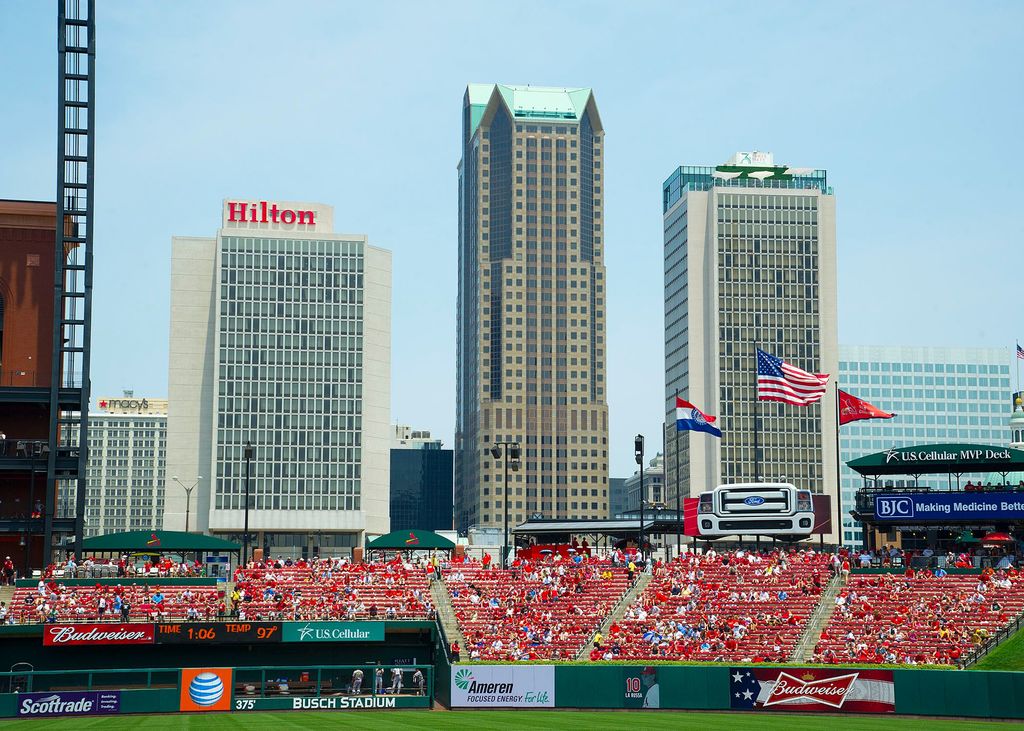 Parking lots and covered garages around Busch Stadium to fluctuate between $10-$30. Like most cities, the closer the lot is to the ballpark, the higher the cost to park. Also note that prices depend on the day of the week as well as the opponent the Cardinals are facing. Ballpark Chasers recommend the west side of the stadium as it is much easier to get through traffic after the game. If you get lucky, you might find free street parking.

The Cardinals have a limited number of parking spaces to sell on game days/nights at their Ballpark Village Lot across from Busch Stadium. To pre-purchase your spot at Ballpark Village click here.

A local favorite and ex-Cardinal owned restaurant is just seconds from Busch Stadium. Mike Shannon’s is a little pricey, but well worth it if you are a fan of fine steaks and seafood. Despite being an upscale restaurant, Mike Shannon’s is fan-friendly and has no problem with your baseball attire on game days. If your pocket book doesn’t allow a lunch or dinner at Mike’s or if you simply forgot to make reservations, Ballpark Chasers suggest walking outside to their beer garden. “The Outfield” (which is located in the back of the restaurant), overlooks Busch Stadium and is open before and after Cardinals home games.

Bar 101 and Paddy O's are for those Chasers looking for more of a sports bar/club atmosphere. Both are a great stop during the warm summer months as they offer plenty of space to gather inside or outside. Bar 101 is a little further out (a 20 minute walk to Busch Stadium) but they make up for it by offering a complimentary shuttle  for Cardinals game.

The first phase of Ballpark Village is complete. Open year-round, Cardinals Nation, Budweiser Brew House, FOX Sports Midwest Live!, Drunken Fish, The Fudgery, and El Birdos Cantina are all newly opened restaurants/bars at the Ballpark Village. Visitors can also find five performance stages which includes the largest retractable roof of its kind in the U.S,  one of the biggest indoor TV screens in the Midwest and an outdoor festival space that recreates the infield of the previous Busch Stadium in its exact former location. Plan on spending a half-day at the Ballpark Village to include time at the Cardinals Hall of Fame and shopping.

Keep in mind that minors must be accompanied with an adult at all times and no one under 21 can enter after 9 pm. Most bars and restaurants will have a dress code. Sleeveless shirts and athletic shorts will be banned after dark and team jerseys are only allowed on game days.

Ballpark Chasers Favorite Bar- 360 Rooftop Bar- a 360 degree view (inside and out) of the riverfront, Arch, city skyline and every base in Busch Stadium. Offering an unparalleled menu, house made themed drinks, and much much more.

Busch Stadium offers a broad selection of ballpark concessions. Ballpark Chasers favorites include: Shrimp Walking Taco, Bratzel’s, St. Louis Seasoned Fries, Toasted Ravioli's and Broadway BBQ. What is a Bratzel you ask? Well, it is quite possibly the best kept secret in all of Busch Stadium. The Bratzel consists of a soft pretzel wrapped around a bratwurst and can be found in section 152. Trust us, it’s delicious.

Bacon Wrapped BBQ Dog. Wrapped in bacon, smothered in baked beans and tangy barbecue sauce, this hot dog is a must sample during your trip to Busch Stadium.

The Mega Slice - this hand-crafted pizza slice is 16-inches long and is topped with a sauce made in house.

Twisted Topped Pretzels - 9 inches of soft pretzel topped with mozzarella cheese and your choice of bacon, pepperoni, or buffalo chicken.

Cardinal fans are one of the most loyal in all of baseball and therefore it is no surprise that Busch Stadium is consistently in the top ten of Major League Baseball attendance. With the Cardinals winning the 2011 World Series and consistently making the playoffs each season, we expect Busch Stadium to be at or near capacity for most games in 2021. Ballpark Chasers recommend purchasing your tickets in advance through the Cardinals box office or be prepared to pay scalpers more than face value outside of the ballpark.

The summer months in St. Louis are hot and humid for those not accustomed to the Midwest climate. June, July and August tend to be the warmest on average and therefore we recommend avoiding it. If your travel plans allow, try your ballpark vacation to Busch Stadium in late April or May.

Walking distance from Busch Stadium is the Cardinals Hall of Fame & Museum. Featuring stadiums, players and championship moments, the Cardinals Museum boasts one of the largest team-specific collections of artifacts and memorabilia in the world. The Museum's seven galleries take visitors on a chronological journey through the rich history of the Cardinals, allowing you to learn about the birth of the franchise, relive special memories and interact with great exhibits.

A perfect way to spend a few hours before the game is at the Gateway Arch in downtown St. Louis. The Arch is the largest man-made monument in the United States, standing 630 ft. tall. Other than just riding the elevator to the top, you can also check out their documentary on the making of the Arch, explore the Museum of Westward Expansion, take a one-hour sightseeing cruise, rent a bike or even splurge on a helicopter ride.

Are you on a tight Ballpark Chaser budget? Not to fret, St. Louis is filled with numerous free tourist options and it is silly not to take advantage of them. Some of our favorites include: driving old Route 66, following the footsteps of Lewis and Clark, exploring Forest Park, taste-testing at the Anheuser Busch Brewery Tour or checking out the 5000 plus animals at the St. Louis Zoo.

Busch Stadium is part of the Ballpark Chasers “Frontier 3” baseball road trip. This includes seeing Kauffman Stadium, Coors Field and Busch Stadium. We recommend finding the cheapest airfare to either Denver or St. Louis and using a rental car to drive in between. The drive from Denver to Kansas City is roughly 9 hours, or about 610 miles; whereas the drive between St. Louis and Kansas City is about 240 miles or 4 hours.

If you prefer to stay within the St. Louis area, take a short drive (20 minutes) to see the Gateway Grizzles play. In addition, O’Fallon, Missouri (roughly 45 minutes from Busch Stadium) is home to the O'Fallon Hoots. Both teams are part of the independent Leagues.  Despite not being affiliated with Major League Baseball, the Hoots and Grizzles still house talented ballplayers and both provide yet another opportunity to check off another ballpark from your list.