And a target of critics it will be in April, May, September and, if applicable, October, when baseball will be played, when it can be at all, in miserable conditions. In this era in which sport is as much about programming as it is competition, and when stadium roof technology has been around for more than a quarter of a century, Major League Baseball should never have allowed a ballpark to be built in Minnesota without a retractable roof.

That's right. How could they be so stupid to not build a retractable roof? Especially when it was TOTALLY feasible too. All they had to do was tack on another $150 million dollars to the project. That wouldn't have been hard to do. It only took twelve years of battle at the state legislature and county commission to secure the $390 million dollars for the stadium, I'm sure it would have only taken a couple years more to ram a stadium bill through with enough money for a roof. Like Abraham Lincoln said: good things are worth waiting for.

And to those who say the tiny stadium footprint wouldn't have room for a roof, I have one word, made up of two words, for you: HOGWASH. They could have expanded the footprint. If they closed and filled the 394 freeway and then tore down the bus terminal/parking ramp, they could have probably fit the footings for the base of the retractable roof. To make room for the roof track, the could have just taken out 5th street and 7th street. See? Easy.

It would have been beautiful too. Just like Miller Park - when the roof is open, you can't even tell it's there. It doesn't hang over your head and block the sky at all. It completely disappears, allowing every seating section to soak up that glorious sunshine.

They don't have roofed stadiums in Chicago or Detroit, but their weather isn't as bad as ours. If you look at this graph, you can see how awful our weather is: 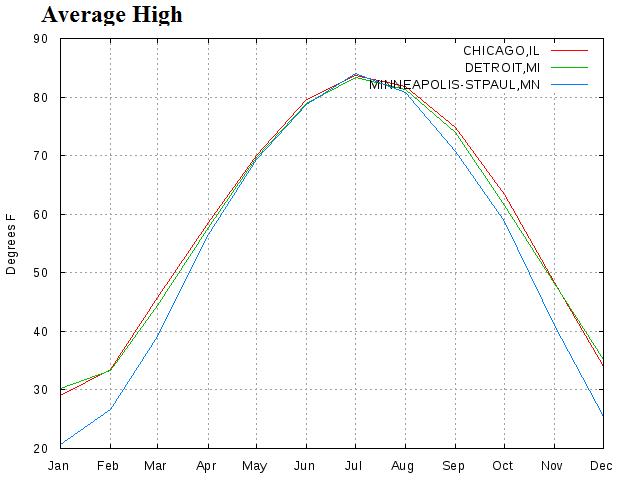 On average, it's about TWO degrees colder in April in Minneapolis than it is in Detroit and Chicago. It's hard to explain exactly what one Fahrenheit degree really means. But let me put it this way: if one degree didn't mean much, why didn't they just make a scale where 100 was boiling and zero was freezing, thereby shortening the whole scale and increasing the value of one degree? If they had done that, one degree would be like three degrees. Luckily, the Fahrenheit scale provides a descriptive measure of the temperature. And two degrees is a lot.

And Minnesotans can't deal with cold weather. Normally, we don't go outside until all the snow has melted around Labor Day. We don't own jackets. We can't wait out a rain delay. And doubleheaders suck!


I don't know why they even bothered to build a stadium without a roof. Just look at how ridiculous it looks! Yup, we should have just stayed in the Metrodome.

Comment by Tom Daymont on April 6, 2010 at 4:17pm
Kurt. Really. Rule of thumb for the interwebs. Always assume its sarcasm unless you are 100% sure it is not.

Comment by Kurt Smith on April 3, 2010 at 4:49pm
I suppose I should have wondered why you said you didn't own a jacket.

Comment by Michael Haas on April 3, 2010 at 11:37am
methinks your sarcasm detector is broken.

Methinks thou dost protest too much. It's still a hell of a lot of money. I see your point, but are Chicago, Milwaukee or Boston any better in April? I would want to see the Cubs' asses kicked if they replaced Wrigley Field with a dome.