Pirates Walk Off Homer has the Cubs Walking the Plank

Since the latest game that I attended was so exciting, I wanted to share my latest post on my blog coryattheballpark:

PNC Park in Pittsburgh, which opened in 2001, is considered by many to be one of the most beautiful ballparks in the MLB so I went in with high expectations. As for the exterior, it is the first ballpark to be built primarily of limestone and it contains unique steel trusses. While it is certainly an attractive park inside, it doesn’t have many distinctive features that are often found in newer ballparks. There isn’t a centerfield sculpture like in Marlins Park in Miami or a big mitt like in San Francisco’s AT&T Park. However, what makes PNC Park special is its setting. It is located right along the north shore of the Allegheny River next to a bridge which was renamed the Roberto Clemente Bridge, in honor of the Pittsburgh Pirates’ Hall of Fame player from the 1960’s and 1970’s.

From almost every seat, there is a stunning view of the skyline of office towers. 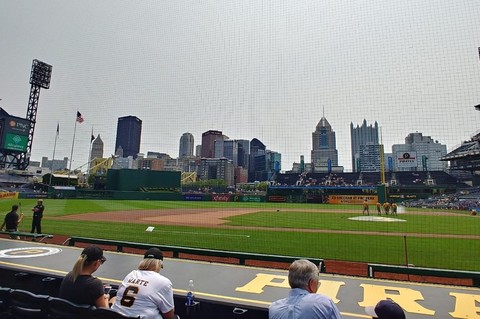 Surrounding the stadium are several bustling restaurants as well as activities for kids, giving the area a party-like atmosphere.

I was eagerly looking forward to the game since I’m an avid Chicago Cubs fan. I always feel compelled to point out that I have supported the Cubs long before they became really good and won the 2016 World Series, their first since 1908. As we entered the stadium, it was quickly apparent that there was a huge contingent of Cubs fans who had made the seven-hour trip from Chicago, since it seemed that at least one out of five fans in the ballpark were Cubs fans. This may have had something to do with the Chicago Cubs leading their division while the Pittsburgh Pirates are currently stuck in fourth place.

The Cubs struck first with a long home run by Kyle Schwarber in the second inning. 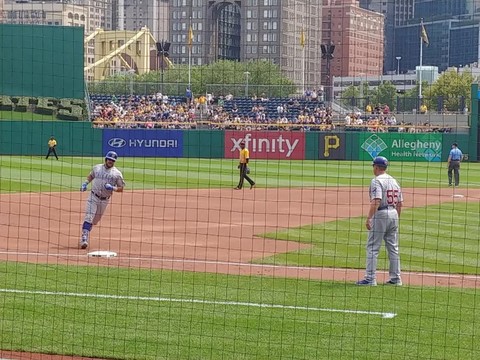 It was then primarily a pitchers’ duel between the Cubs’ José Quintana and the Pirates’ Jameson Taillon. The Pirates tied it in the sixth inning setting up late-game drama. The Pirates’ third base coach, Joey Cora, ended up playing a major factor in the game. With the tying run already in, the bases loaded and one out, Josh Bell hit a fairly deep fly ball to left field which should have scored the go-ahead run. However, Cora inexplicably decided not to send Gregory Polanco from third base. Schwarber is tied for the league lead in outfield assists which clearly played into Cora’s decision. However, Schwarber’s throw was off line and Polanco would have scored easily, if sent. In the 7th inning, the Pittsburgh Pirates’ Starling Marte hit a ball into the left field corner with pinch-runner Greg Newman on first base. Cora, maybe trying to make up for the prior inning’s gaffe, sent Newman home. The relay throw from Schwarber to Baez to Contreras was a thing of beauty and Newman was out by a hair. The Pirates demanded a video review, but the tape revealed that Newman was indeed out, even though just barely. Baseball is a game of inches and this was just one more example. While I was thrilled as a Chicago Cubs fan, I felt tremendous sympathy for Cora. He seemed truly despondent and the Pirates faithful let him have it with heckling from all around me. The fans were quite brutal to him.

So the game continued into extra innings. Joe Maddon, the Cubs’ manager, proved his genius once again in the bottom of the 10th inning. Maddon inserted his closer, Pedro Strop, after reliever Steve Cishek walked the first batter. I questioned this decision aloud since Cishek looked to have the Pirates’ batters confused with his unorthodox, nearly underhanded delivery. 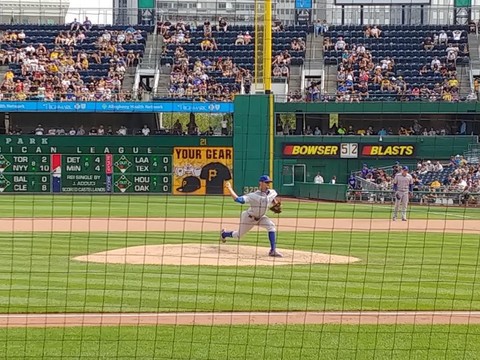 Strop got a quick out but then proceeded to load the bases. With only one out, it looked gloomy for the Cubs. Maddon called in the right fielder Ben Zobrist to play on second base as a fifth infielder (leaving right field unoccupied) with the remaining infielders in on the grass. With a lefty at the plate, this strategy seemed very risky. However, Maddon turned out to be clairvoyant as the ball was hit right to the second basemen who threw to Zobrist at second and then on to first for an inning-ending double play. At this point, it looked like we were headed for a marathon game, especially after the next Cubs’ reliever, Brandon Kintzler, retired the first two batters in the bottom of the 11th inning. Kintzler then went 3-0 on Adam Frazier, the next batter. Probably thinking Frazier was taking, Kintzler grooved a fastball. Frazier launched it deep into the right field stands sending the Pirates’ fans into a frenzy with the walk-off homer. 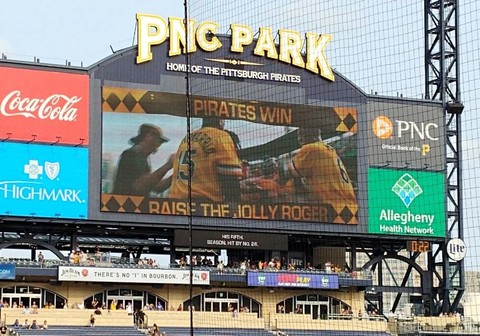 As sad as I was as a Cubs fan, there is truly nothing more exciting (as a baseball fan) as the walk-off home run. Frazier was mobbed by his teammates with the traditional Gatorade shower. 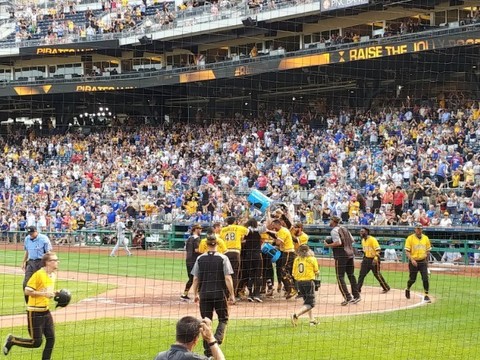 Pirates fans went home truly happy, if only for one night.