Maybe it was because my first game was at Wrigley Field.  I walked out into the stands and thought, "What beautiful wonder is this, with pristine green grass and ivy covered walls under wide open blue sky?"  (Actually, I was seven or eight; I'm pretty sure I just said, "Wow!" a lot.)  Or maybe it was the majesty of Yankee Stadium (the last one, not the current one), with all those championship banners, retired numbers and a history you can almost physically feel.  Perhaps it was squeezing into the small, wooden seats at Fenway Park, feeling like I was in an old black and white newsreel, looking across the field to the Green Monster, (and over it, to the iconic Citgo sign).  It could even be the games at Shea stadium.  Symmetric, solid, somewhat boring -- but to a young Mets fan growing up in the '80's it was, and ever will be, home.

Whatever the original cause, the idea grew.  And not just to see them all, but to do it by car, in a single summer.  (Convertible, of course...)

Then, of course, I graduated college, discovered things called jobs and bills, and the reality of not having summers off began to sink in.  This trip would have to wait, if it could ever happen at all.

Since then, I've managed a hodge podge of different stadiums over the years.  Some of them don't exist anymore, like the Vet ("Why is the field the wrong color?") and old Comiskey.  Others do, like Chase Field and At&T Park.  And, at least one, The Coliseum, really shouldn't.  (It's a lot of fun, but the A's and their fans deserve better.)  All these visits have been more a matter of happenstance than planned trips.

Yet, happenstance has occurred again.  Only, this time it has given me a chance at the big dream:  All 30 stadiums, the Hall of Fame, by car, all in one summer. 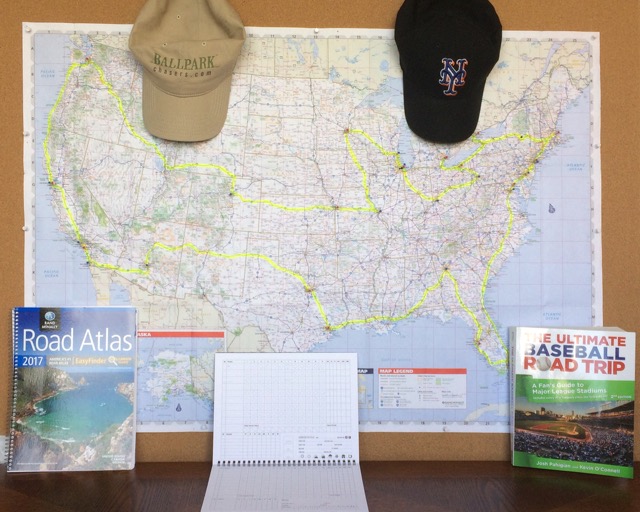 If I look organized, don't be fooled.   I feel like I have not planned this very well and have left far too much to the last minute.  But I have a map, a MLB schedule, a car (a convertible, actually -- more happenstance) and a credit card.  I'll figure this out -- or wind up broke and broken down in the middle of the desert.  Either way, it's gonna make a heck of a story.  And, if you're reading this, I hope you enjoy following along!