Are you attending an Opening Day ballgame? It's an annual tradition on our website to post photos from Opening Day around Major League Baseball. Each year we get closer to all 30 ballparks represented. If you visit a ballparks 2015 Opening Day, please paste your photo in the comments section below. Enjoy the season and happy Chasing! 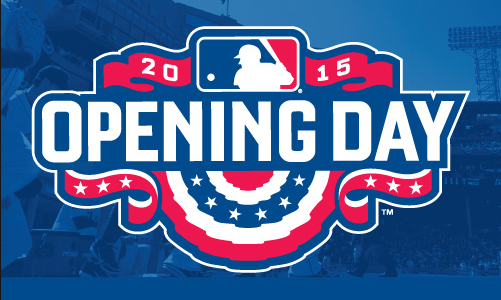 Opening Night at Wrigley Field was a bit of an adventure.  I have been lucky enough to have been at every Cubs home opener since 1993 but a night opener was a whole new experience.

Even though it was an Easter Sunday for a lot of folks, the Wrigleyville restaurants and bars were absolutely packed before the game.  The bleachers, which were supposed to have been ready to go for this game, were not even close.  (If you hadn't heard, the bleachers may not be ready until June.)  In an effort to dress-up the work in progress, the Cubs spanned the bleachers with massive Ernie Banks banners.  This was a nice touch.  And it was a beautiful night for baseball.

Here is the Ernie Banks statue now placed in front of the marquee at Clark and Addison: 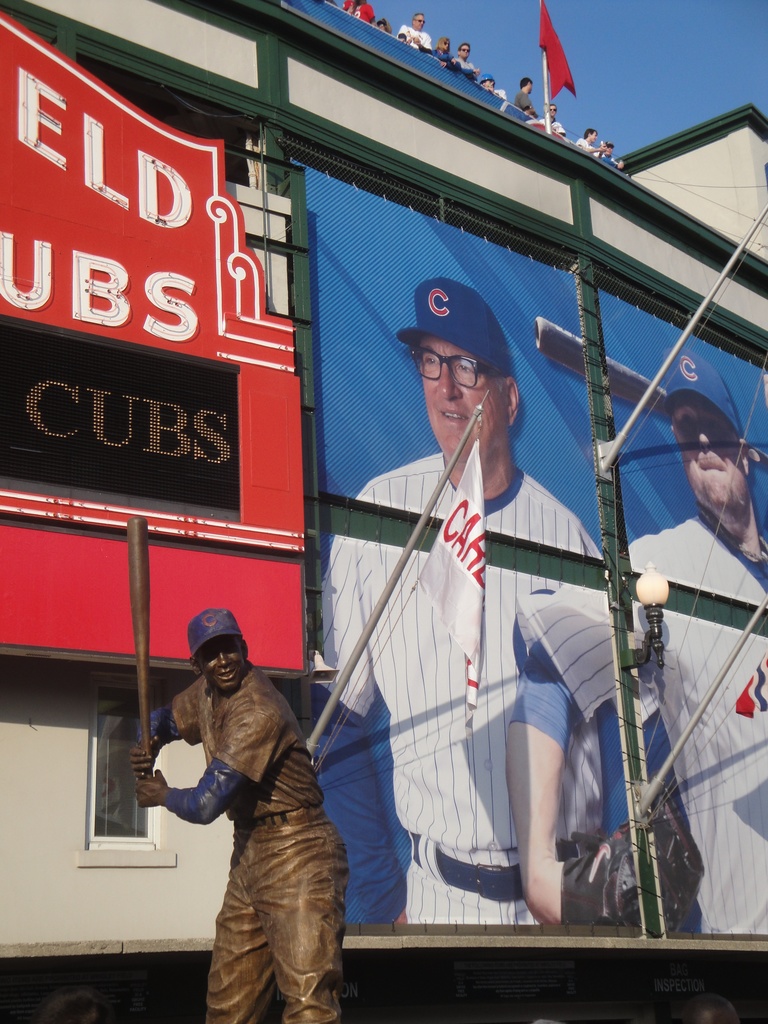 Inside, we got our first look at the new - gasp! - jumbotron installed earlier in the week.  This modernization will likely take some getting used to for a lot of folks, but I really liked it. 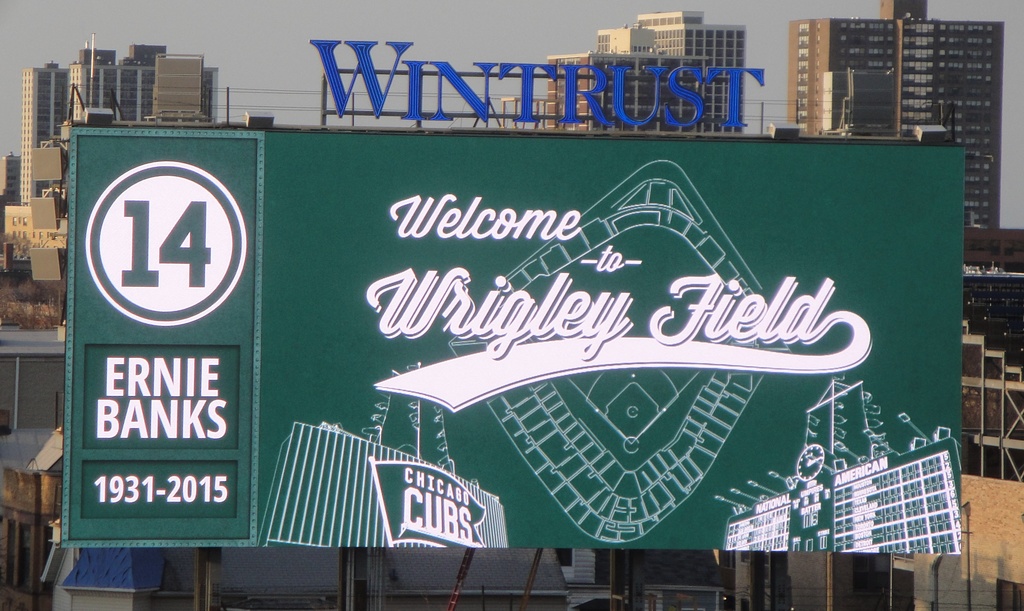 The teams were introduced, along with the starting lineups.  Joe Maddon got right to his quirky business and hit Jon Lester 8th, relegating Tommy LaStella to the last spot in the order for the Cubs. 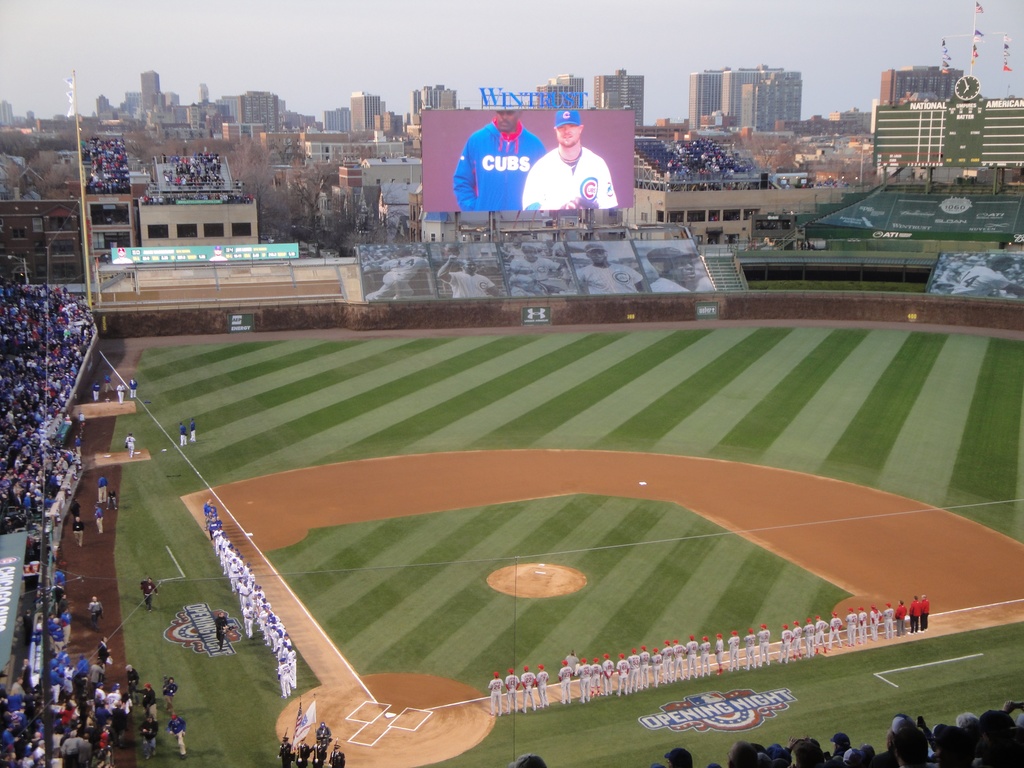 The Cardinals put up runs in the first two innings and despite lead-off doubles for the Cubs in the first and second, they were unable to push any runs across in either frame.  Adam Wainwright was on.  Lester was hittable.  And the Cubs got shut out.   Not too much to cheer for as a Cubs fan at this game but getting to experience Opening Night and the touching Ernie Banks tribute was something I will remember forever. 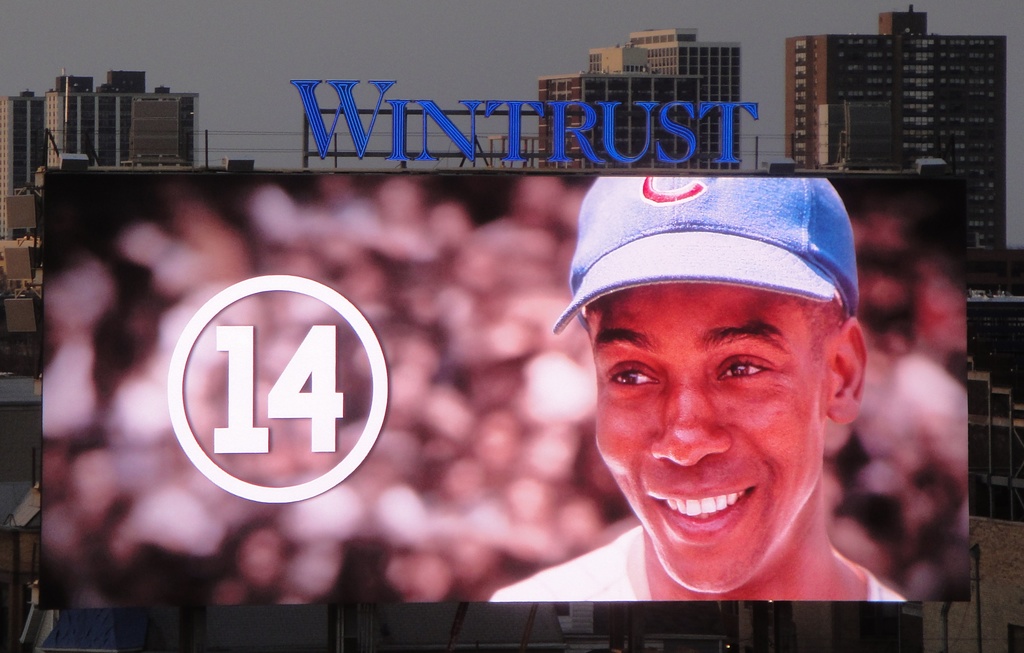 Great photos, John! Thanks for starting us off!

Home Opener for the Washington Nationals...not the best way to start their 10th year, at least I can say I've been to all 10 home openers. 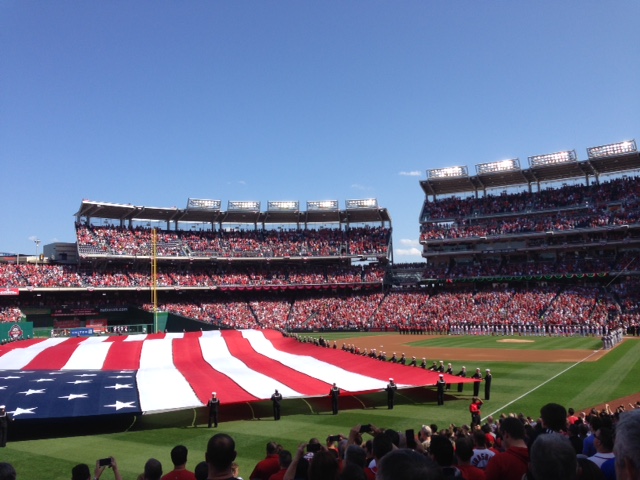 Thanks for posting, Marshall!

SAFECO Field 1:10 Start, sold out, Felix Hernandez pitches 7 innings with 10 strikeouts after throwing a first pitch strike. Mariners win 4-1.  Trout hits homerun and then strikes out three times.  Weather was cool, cloudy, and some sun breaks.  Joey Cora returned to throw out first pitch. Kyle Seager is presented with his gold glove for playing at third base in 2014.  Is the World Series in the future this year for the Ms.  Having attended 22 openers without ending up there I hope it happens this year.

Permalink Reply by Richie Devotie on April 8, 2015 at 7:07am
Chuck and I went To Reds Opening Day 2015. While it was fun, it was very crowded and the weather didn't help none. We still had a good time though.
Attachments:

Cool! Would have loved to of been there with you guys. What a great win for the Reds!

Permalink Reply by Chris Ferguson on April 8, 2015 at 7:06pm
Attended opening day at Marlins Park. Had an awesome time! My son got to meet his favorite pitcher Steve Cishek. Getting to visit with him at the bullpen and get a ball made it even sweeter. However the Marlins came up short to the Braves. Tuesday we traveled to Tropicana field. Number 7 and 8 down with number 9 to come in August!
Attachments:

What a great memory that will be! Thanks for posting, Chris!

Permalink Reply by Chris Ferguson on April 8, 2015 at 7:13pm
We look forward to August. Are there any of the blocked off seats still available?

Yes there are seats available! Are you thinking of attending? Please RSVP on the event page if/when you are ready to confirm. Please feel free to direct message me if you have any questions.