What is your hometown ballpark?
AutoZone Park (Memphis Redbirds AAA) 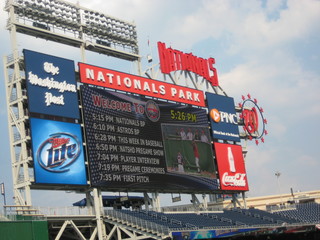 Pics from recent trip to Nationals Park, 7/11-13, Astros at Nationals.

Chasing down all 30 MLB ballparks

Enjoyed watching some of the games today.  I like this Opening Day in March on a Thursday...getting ahead of the Final 4 games; I remember last year having baseball games opposite the NCAA Championship game on that Monday night, which kind of took the spotlight away from MLB.

PHI over BOS in the WS...going with the teams that look strongest "on paper"; but, I really think if Philly stays…

Looking back at my preseason picks, I hit on 50% of the teams to make it to the post-season (Phillies, Braves, Rays, Twins). I'll stick with my AL pick of the Rays to make it to the WS to face the Phillies in a rematch of the 2008 WS.

NLDS
Phillies over Reds in 3
Giants over Braves in 4

ALDS
Yankees over Twins in 4
Rays over Rangers in 4

LCS
Phillies over Giants in 7
Rays over Yankees in 6

WS
Phillies over Rays in 6

Dutch, got a great supplier for Jerseys? I need to buy 14..playing dream softball game and want signed jerseys. ANy ideas? https://mab-celebrity.com/c-2825-team-of-dreams-and-island-fest.aspx

Nick DiColandrea said…
Hey Dutch! I'll be hitting up the Redbirds for a game in late April. Any suggestions! Do you have a post about any of your visits there someplace? Hope you are well!

Bob DeVries (30 all in 09 & 10) said…
Hey Dutch. Thanks again for your donation to Shawn Marie's Memorial Fund. I will be attending the Twins Autograph Party on 6/12 from 11 to 5 before the game that night. The ticket for the party was only $40 and allows as many autograghs as possible. I look forward to meeting at Target!!!