Some say we are crazy to take this on with a baby, but to us it will be an opportunity to learn about the uniqueness of each baseball park, its fans, our great country, and most importantly, each other.

Sofia, four years old, attended her 3rd consecutive Opening Day and it's amazing to see her grow up through the lens of the ballpark. 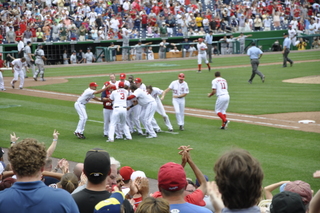 The game went into the 9th tied at 0. Laynce Nix pinched hit for Pitcher Tyler Clippard and hit a sacrifice fly to left field scoring… 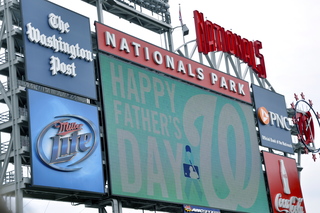 June 18 & 19, 2011: What's better than a baseball game on Father's Day? Spending the Father’s Day weekend with your daughter at the ballpark.
Sofia and I spent Saturday and Sunday (mom joined us for the Father's Day game) at Nats Park to watch the Beltway Series. We had hoped to see the Nationals sweep the Orioles, but rather saw them split the games we…

30 Ballparks and a Baby (31) said…
Bob, That would be great! Let us know when you are coming to DC or Baltimore.
Safe travels,
Roberto

Bob DeVries (30 all in 09 & 10) said…
Thanks Roberto - I enjoyed following your travels last season. Maybe this summer if you are free I would love to take in a game with you and your family.

Chuck Booth (35) ALL 30/23 DAYS! said…
Great work. You have memories that will last a lifetime with this journey. You are part of a select few that have seen all stadiums in one baseball year. Congrats again..

30 Ballparks and a Baby (31) said…
Craig and Evan, thank you very much! We had a great time and enjoyed every minute, even when we weren't at a ball game. ;). Further, it was unbelievable to have had the opportunity to our daughters grow up before our eyes!
We encourage families to get out there and enjoy our nations past time!

Evan (13) said…
Can't believe you've seen them all, with a baby! Must have been one heck of a summer.

Eric Frohriep (19) said…
I see you bought a Perogie. I almost bought one for my kids, but bought a Parrot puzzle and a couple softer baseballs.

Craig (17) said…
Hey Roberto- welcome to Ballpark Chasers! We look forward to following your journey this summer. Feel free to use our site to blog, post pics, videos, etc.