What is the most memorable regular season game you attended?

Rarely does a person have a chance to witness their favorite team capture the World Series championship. 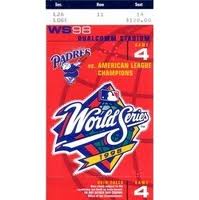 -The gates were jammed at Qualcomm Stadium in beautiful San Diego, California. Fans appeared really enthusiastic despite the Padres trailing in the series 0-3. Josh and Sven met Steve Garvey near the will call ticket table in front of the stadium. Garvey…

The real bulk of the driving was completed before I joined the trip in Baltimore. However, I believe the most difficult days still remained. Going from Philadelphia to DC in between 4pm and 7pm on a Thursday, and going from Chicago to Milwaukee between 4pm and 7pm on a Friday, with an overnight drive in between. Now that was going to be the most difficult stretch. 26 days was the new goal, and we were determined. 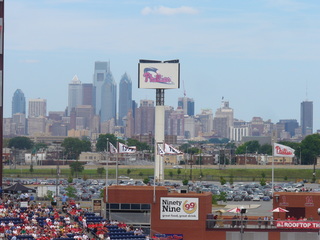 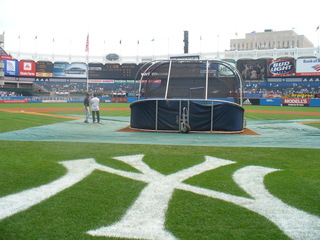 This Week in Baseball thought they could get a whole segment out of following us around today. We went to both Yankee Stadium and Shea Stadium, watching the day game in the Bronx, and cutting accross town to see the Mets at night. With the entire trip almost completed, and Josh about to set this 'unofficial' record, TWIB wanted to tag along and see how we/he did it.

Basically, TWIB followed us around during our day in NYC, interviewing Josh, Eric, and me. They even took the… Continue 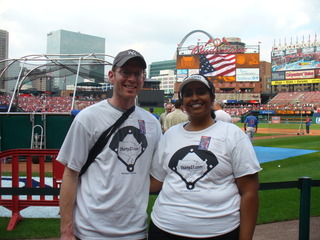 Thirty27 finally got some well-deserved recognition on July 4th as the St. Louis Cardinals were nice enough to take Josh and Su onto the field for batting practice (right). While this was a great moment of the trip, it was also just a little forshadowing of what would occur in NY in a few days.

Following the game in St. Louis, the Thirty27 team headed to Cincinnati, where Josh was interviewed for local television. Luckily, Josh has good interviewee skills, so he actually… Continue 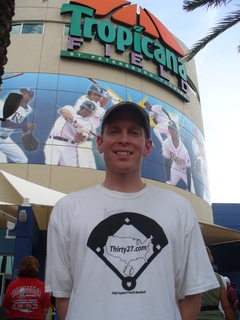 How many current MLB ballparks have you visited?
28

What is your hometown ballpark?
Yankee Stadium

What is your favorite ballpark?
PNC Park/Yankee Stadium for nostalgia

Hey Josh, I have a question? When would day one of the journey start? When you start driving or when you attend the first game?"

Chuck Booth (35) ALL 30/23 DAYS! said…
Thanks a lot Josh, I still feel that there is a place for both records. Your accomplishment is impressive. I would like your input very much as to the ballparks. Besides that, we are amongst handfull of people that have done the trip in under a month. Your memories are still pretty fresh so anything you want to add would be great. I will be blogging and writing a lot and in then next few months and look for you to be a key contributor. The rankings are from the blog I wrote when I put up my top 30. They have 7 key categories ranked 1-30 with the lowest score for all 7 combined comprising the top 30.

Craig (17) said…
Hey Josh...welcome to Ballpark Chasers! I hope we can be a great tool for you guys on your journey at the coolest world record ever!!

Thirty26(42) said…
Hi, my name is Josh Robbins. I thought you might be interested in my world record attempt starting June 16th in Seattle, WA at Safeco Field.

Hawthorne, Calif., May 5, 2008 – One man will strive to set another world record this summer. South Bay resident Josh Robbins, with help from his friends and family, will drive from Seattle, Washington starting June 16 to July 12, 2008 and hope to establish a world record by driving to all 30 major league baseball stadiums in 27 days.

While preparing for a trip to achieve a personal goal, an effort to share their passion for baseball emerged. In addition to the pursuit for a new world record, this group is also raising money to benefit the Jim Thorpe Little League in Hawthorne, California.

Hawthorne Mayor, Larry M. Guidi, has pledged $500 to the project and urges anyone interested to donate what he or she can afford. Fifty-percent of all donations go towards the Jim Thorpe Little League in Hawthorne, California. The other half will go towards the Thirty27.com project for tickets, food, traveling expenses, and a vehicle.

According to Josh Robbins, “we kept receiving such great feedback, support and enthusiasm from people about the trip that we thought we could use it as a platform to give back to our community by sharing our passion for baseball with the youth.”

Business supporters include Toyota USA, the Mattel Corporation and Homewood Suites by Hilton.

“We hope to raise $10,000 and would appreciate financial contributions or in-kind donations to auction off. This way, we hope that other young people will continue to experience the excitement of this American pastime and develop a love for it as we did.”

For more information about the trip and fundraising effort, please log onto thirty27.com or contact Josh Robbins at 518-331-7211 or via email at robbinsjosh@hotmail.com

Thirty in 27 for a World Record and Little League

There are multitudes of die-hard baseball fans in the country, even in the world, who have never been to a major league baseball game. Many fans have listened to the radio and heard that distinctive sound of wood hitting the leather ball, over the fence and out of the park. Some who have visited a major league baseball park tell the story many times in their lifetime, as a visit to the House That Ruth Built (Yankee Stadium), or Wrigley Field, or Fenway Park are now becoming visits of legend as the old parks make way for new, and names are interchanged as the newest sponsor buys the land.

Josh Robbins, a lifelong New York Yankees fan, moved to southern California from his upstate New York hometown. He and high school friends, Sven Jenkins, John Treadwell, and Bob Adney still talk about the games the Yankees play even though Bob and Josh live on the West Coast nowadays. But a lifelong personal goal for Josh will be fulfilled with the help of his three boyhood friends, his Dad Jonathan, and Robbins’ wife, Suganya (Sue) when Robbins leaves southern California on June 16 for a 27-day automobile trip to visit all 30 major league baseball parks.

“My friend Bob will meet me in Seattle. Along the way I’ll meet up with my Dad in Kansas City. Sue will meet me in Minneapolis, and John and Sven will join me in Baltimore for that leg of the trip. From Seattle to San Diego, from Arizona to Florida, from Atlanta to Boston, Chicago, Kansas City, Cincinnati, Pittsburgh, Toronto, Baltimore, Texas, Colorado, not in that particular order, are all on the itinerary,” said Josh. “We hope to raise $10,000, with half paying for the trip and the other $5,000 being donated to the Jim Thorpe Little League.”
The trip does have some sponsors in Toyota USA, The Mattel Corporation, Rawlings, and Homewood Suites by Hilton. But donations are being accepted for expenses not paid by the sponsorships secured. In-kind donations for auctioning at the year-end picnic for Jim Thorpe Little League are also being accepted. And the website, HYPERLINK "http://www.thirty27.com" www.thirty27.com, has information on making donations by mail or PayPal.

“When we first started telling friends and relatives about our trip we got great feedback,” shared Josh. “People were willing to ‘bet’ that we would or wouldn’t make the world record and that got me thinking about how we could launch something that would also give back to a community group and, of course, Little League was an obvious recipient.”
District 37, Jim Thorpe Little League received a gross of baseballs from Rawlings. Toyota USA and Homewood Suites will sponsor the road trip and accommodations in several major league cities. Airfare between several of the cities and living expenses, for things such as beer and hot dogs, peanuts and soda at all the parks (editorial note: writer’s creative license used here) will be taken care of by donations.

At a recent Hawthorne City Council meeting, Josh Robbins presented his project and received enthusiastic support from Mayor Larry Guidi and the City Council. “Little League is a fond memory for many young people in this room tonight,” said Guidi, “and I hope that some of you will go back to those memories and support this project which will benefit Little League in Hawthorne.”

“Young people should be allowed to experience the excitement of playing baseball and participate in one of America’s favorite pastimes. We developed our passion for baseball as Little Leaguers,” recalled Josh. “We wanted to fan that passion we have by visiting the parks, but our 50% sharing of donations with Little League is now a very important component of the project.”

Josh is a video production assistant for several local cable stations in the South Bay, Hawthorne, Lawndale, and Torrance included. He will be filming a video log and journal of the trip for the 27 days to produce a documentary of the World Record-breaking project and to showcase at film festivals around the country.
Josh Robbins will leave on June 16 for the first game, Florida Marlins at Seattle Mariners, and visit the last ball park in Milwaukee when the Brewers play the Cincinnati Reds on July 12, the day after his birthday. With the help of the community to complete his achievement of the World Record of 30 ball parks in 27 days, Josh will give back to his community and to Jim Thorpe Little League.

By the 7th inning stretch of the 27-day trip, somewhere between the LA Dodgers at Houston or Philadelphia at Atlanta, Josh and his trip mates may be longing for a comfortable couch and a radio. But with a World Record to make it into the books of Major League Baseball history, they will keep rounding the bases of the superhighways until July 12 at 7:05 p.m. when the Umpire yells, “Play Ball!” and the last out is pitched.