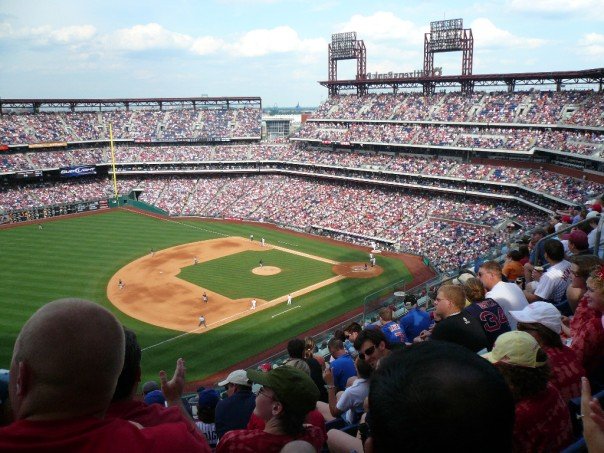 Notable Award: Like Camden Yards, its a newer model stadium with the feel of an old time baseball stadium. A batters park, with great views from any seat and the cheapest beers in the majors, 6 dollar 22oz Sam Adams, can't beat that!

With the red brick facade, large open concourses and nice view of downtown Phillie, Citizens Bank Park makes its way into the top 5 parks in the majors. Opening in 2004 and replacing the old Vet stadium, which was a multi-purpose stadium for baseball and football, the Phillies improved their appearance over night. The Vet was built in the days of the concrete donut style which in the 60's, cities seen as a great way to build a modern stadium for two of their pro teams and save money, but the concrete donut never made a good baseball park.

In the late 90's, there was a movement within baseball teams to make their stadiums more of a baseball park, and less of just a building that they play in. They wanted to make the stadium park of the team, and the Phillies jumped on that band wagon.

The city of Philadelphia took over the souther part of their city and dedicated it to all their sports teams. They built several complexes to hold their football, basketball/hockey teams and of course Citizens Bank Park for the Phillies. All the stadiums have huge parking areas for tail gating and ease of travel. Also the SEPTA has trains that run right down to the fields, so if your staying downtown, you can get their in about 30 minutes with no problem.

Once inside the stadium, you'll see easily navigable concourse that are wide, easily marked and have great views of the field while you walk around the main level. Once you get to where your seat is, you'll find several choice of food and drinks, included those cheap 22 oz beers. Now this was in 2007, so things may have changed since then, but at the time it was the best value in baseball.

In the outfield where the bullpens are, you can stand over and watch the pitchers warm up. This feature also is found in the Phillies spring training park in Clearwater Florida. Its a nice standing room only area where you can enjoy the game and see the process a pitcher takes to get warmed up for the game. In addition to this, the park is completely accessible 360 degrees, meaning you can get to all parks of the park by walking in both directions on the main level.

In addition to a great park, Phillie is a great city. A small major town that feels a lot like Boston. Boston and Phillie are both the little brothers to NYC, but are a stones throw away if you want to go for a quick visit. Philies transit system is easy to use and gets to all parts of the downtown area. if you were going to stay the night, I would suggest staying downtown, near broadway. When your there, visit the museum of art and run up the stairs like in rocky, go check out the Liberty bell and of course have a Phillie cheese stake.

This has been Arty 84