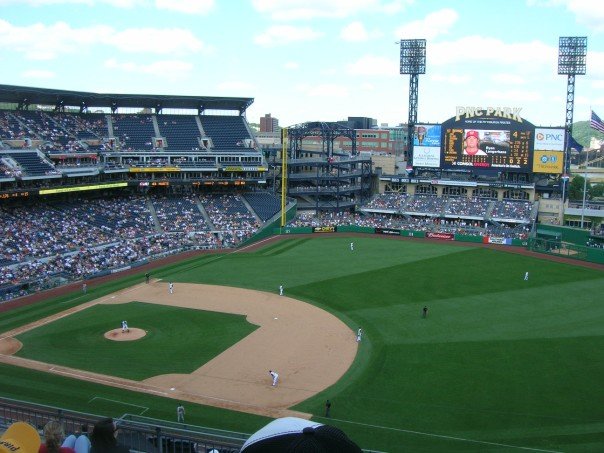 Notable Award: Easy to walk to from downtown and great views of the 3 rivers and downtown Pittsburgh.

PNC Park is a new park, but you can tell it was built for a small market team. Likes its sister city to the east, Philadelphia, the Pirates were a victim of a concrete donut which they shared with the cities football team, the Stealers. The former stadium was Three Rivers Stadium and was built in the early 70's a result to build two new stadiums for the cities sports team for the price of one. As talked about earlier, the concrete donut was a staple to many cities in America during this time.

In the late 90's Pittsburgh and their teams decided they needed to break up and get their own stadiums. PNC Park was designed and built for the Pirates, who at this time were already in a 10 year playoff drought, so the fund were not exactly their for them, and the stadium design reflects that directly.

Now don't get me wrong, the stadium is very nice, but basic. It reminds me of a slightly bigger minor league park. It is a cookie cutter of a basic ball park with nothing special about it to make it unique. The facade along the stands is an odd choice of slate that has a pink tone to it. It seems like it was placed their in a last ditch cheap effort to cover the concrete.

There is a Outback in left field, where if you get in before the game and order food and drinks during the game, you can watch the pirates for free, which is a really cool feature. The crew and I spent a few innings in there prior to getting to the game. The game we went to was against the Nationals, who at this time had just become a team a year prior and as a result, there wasn't a huge turn out but we had a good time.

While sitting in the stands there is a beautiful view of downtown Pittsburgh, the rivers and the beautiful yellow painted bridges that cross them. One such noted bridge is the Roberto Clemente Bridge. We stayed downtown and we walked about 20 minutes from our hotel, over the bridge and to the game. It was a beautiful summer Sunday. Pittsburgh has a very limited subway system, so walking really was the only way.

As for being Sunday, that led to absolutely nothing to do downtown after the game. We walked back to our hotel, went down to the restaurant and that was empty. we searched for a bar or a strip club and there was nothing. The city looked like a set of a movie with hardly any cars anywhere. It was just as well though, we had left Phillie that morning at 5:00AM to make the 1PM game. It was about a 4 hour a drive from Phillie to Pittsburgh. We took a nap after the game an went exploring.

My cousin and I went down to the bar in the hotel to check it out. There we met a bartender who was very helpful at he Double Tree we were staying. He sent us to this park of town which for the life of me I can't remember. It was a 10 minute cab ride and about a 30 minute walk back. It was a street in Pittsburgh full of bars, pizza joints and little dive restaurants. For a Sunday night the club we went into was hoping. It is in fact the only city I have ever been to that the girls weren't impressed with the Boston Accent.

If you are planning on visiting PNC, I would suggest stay downtown, walk to the game and maybe plan for a friday or Saturday night. There will probably be more going on in the old blue collar town. I heard there are a lot of bars to check out before the game around the stadium. Would definitely visit again and the experience was nice, I was just a little disappointed with the over all stadium design specially after seeing Camden and Cit Park prior.

This has been Arty 84