I took advantage of the long weekend to take a trip to Kansas City and St. Louis. The trip also served as an opportunity to meet my girlfriend’s family so we killed two birds with one stone. Kansas City is a beautiful city but I didn’t like having to pay 50 dollars for a cab to get to our hotel. Kauffman Stadium is also far from the center of the city so I recommend you bring your own car or rent one if you plan to spend a few days there.

I liked Kauffman Stadium and I was surprised to find a large crowd for a Wednesday game but Zack Grienke was pitching so I think that was the reason. The fountains in center field are a very original touch and there were plenty of choices for food, I decided to go with BBQ brisket sandwich from All Star Barbeque and it was great. 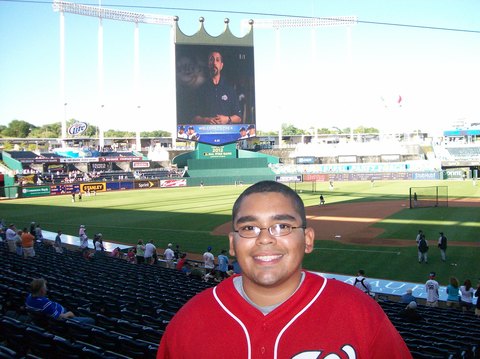 Our seats were on the upper deck along the first base line and the view was great. The crowd was very animated during the game, especially when the Royals took a 7-1 lead with a Jose Guillen home run in the 7th inning. The White sox made a comeback attempt in the bottom of the eight but ended up losing 7-6 in the end.

We visited the Negro League Baseball Museum and while it is a small place compared to Cooperstown, it has an impressive display of artifacts and historic information. I learned a lot about the Negro Leagues that day and it made me think about Jackie Robinson and the breaking of the color barrier. 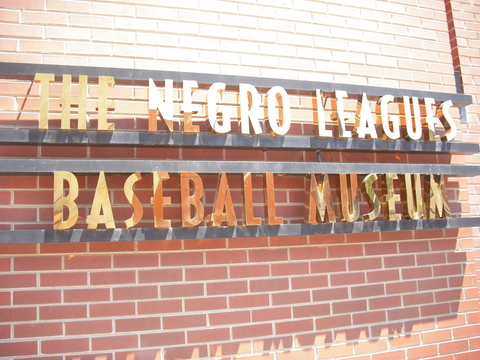 Jackie Robinson was probably the perfect player to break that barrier because of his combination of grace and baseball talent. I always wonder about the first African American athletes to break the barriers in other sports and what I noticed was that none of the others athletes were as successful in their sport as Jackie Robinson was in baseball. While the event was significant by itself, I think it would not be remembered the same way if the player had been a backup outfielder or a relief pitcher.

I really recommend visiting the museum when visiting Kansas City. The Jazz Museum is also in the same building and for $10 you can tickets to both museums. We also enjoyed the food and shopping at the Plaza.

Comment by Hansel Rodriguez on July 6, 2010 at 1:15pm
We stayed at the Best Western Seville Plaza and we liked it because it was withing walking distance to the shopping center and food. It was just kind of far from the airport and a $25 cab ride to the game.

I was kind of upset though because i got a great deal on tickets and then spent 100 bucks on cabs between the game and the airport.

Comment by Chuck Booth (35) ALL 30/23 DAYS! on July 6, 2010 at 1:09pm
Ya for sure--for $50 you coulda had sedan service to the ball game--KC is the hardest park to get to from the airport--note to chasers--the gas station at the car rental center is note open for business from 12am-6am---and there is not another gas station for 7-8 miles--convenient so they can charge you 6.99 a gallon. My suggestion is to stay at the BEST WESTERN at MCI for about $70 and if you need to get around rent a car--otherwise if it is just to the ballgame and back you can pay a sedan Driver $110 roundtrip for up to 4 people--car rentals go for about $50-60 for the day-plus $25 insurance and then $15 for gas easy and $10 at KAUFFMAN