We just returned from a family trip to Southern California that included visits to Disneyland, Hollywood, Sequoia National Park, the San Diego Zoo and, of course, ballparks!

On Tuesday, July 8th, we attended the Angels and Blue Jays game at Angel Stadium. Upon entering at the main gate, the two massive Angels hats are even bigger in person than they look. We loved the fact that there was the MLB logo on the back of the hat, too, just like a real one. 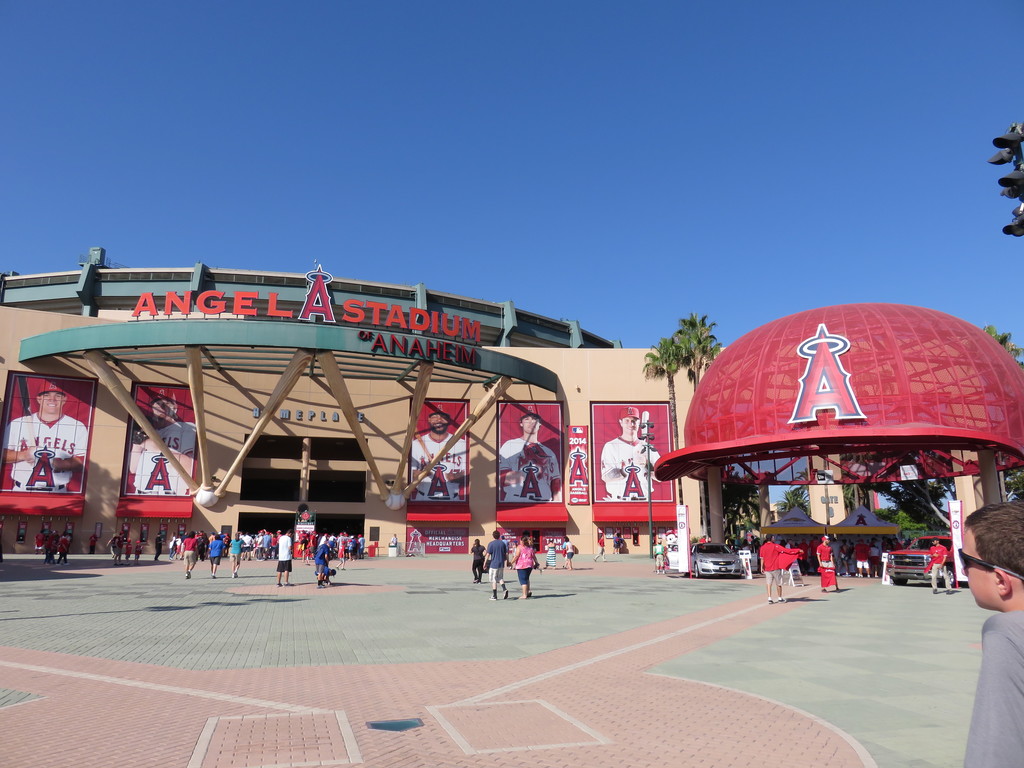 It was Cowboy Rally Monkey giveaway night so my youngest son insisted that we get there extra early to insure we did not miss out. This worked for me as it allowed us the opportunity to catch a little of the Blue Jays’ batting practice and plenty of time to walk around and explore the park. 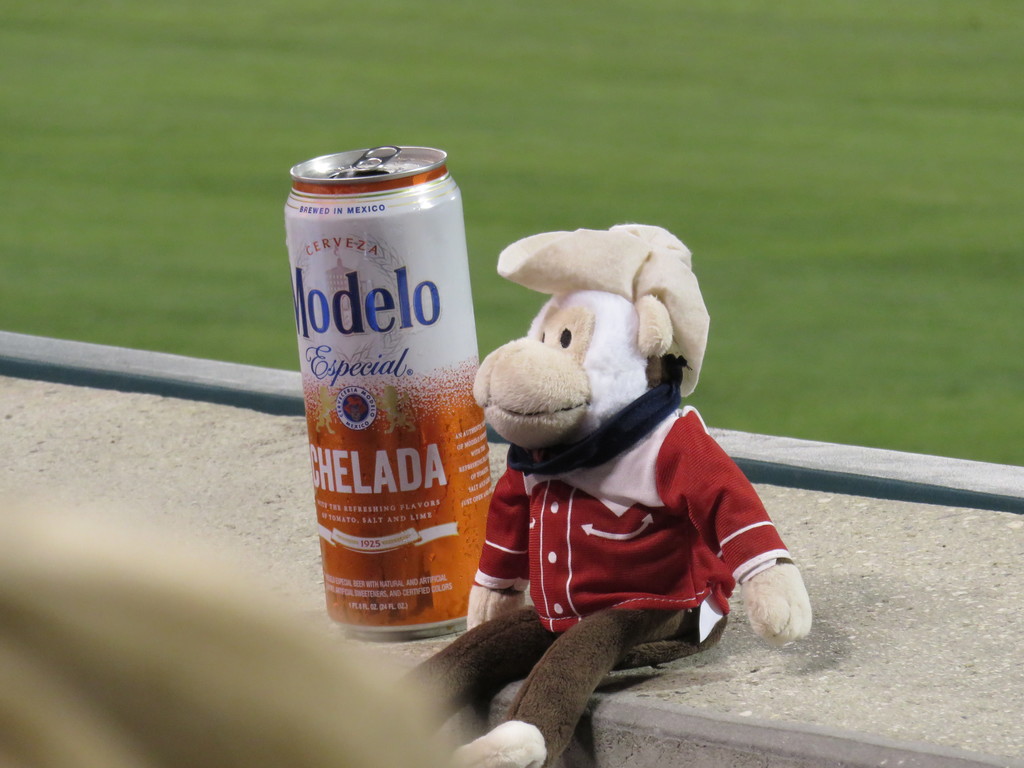 The 2002 World Series trophy is on display in a glass case near the main entrance, along with a bunch of other cool memorabilia from their championship year, including the original Rally Monkey. 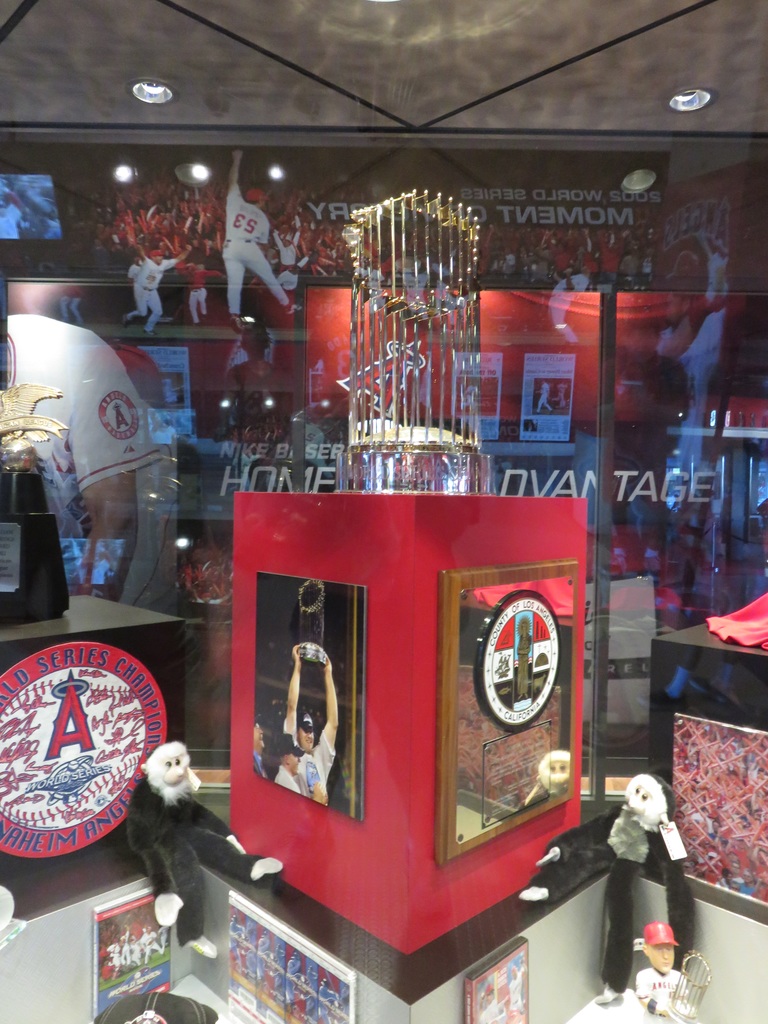 Our seats were in Section 131 down the first base line. I don’t think that I would sit here again as it was difficult to get a good view of the batter as you had to turn left and crane your neck around to see homeplate. 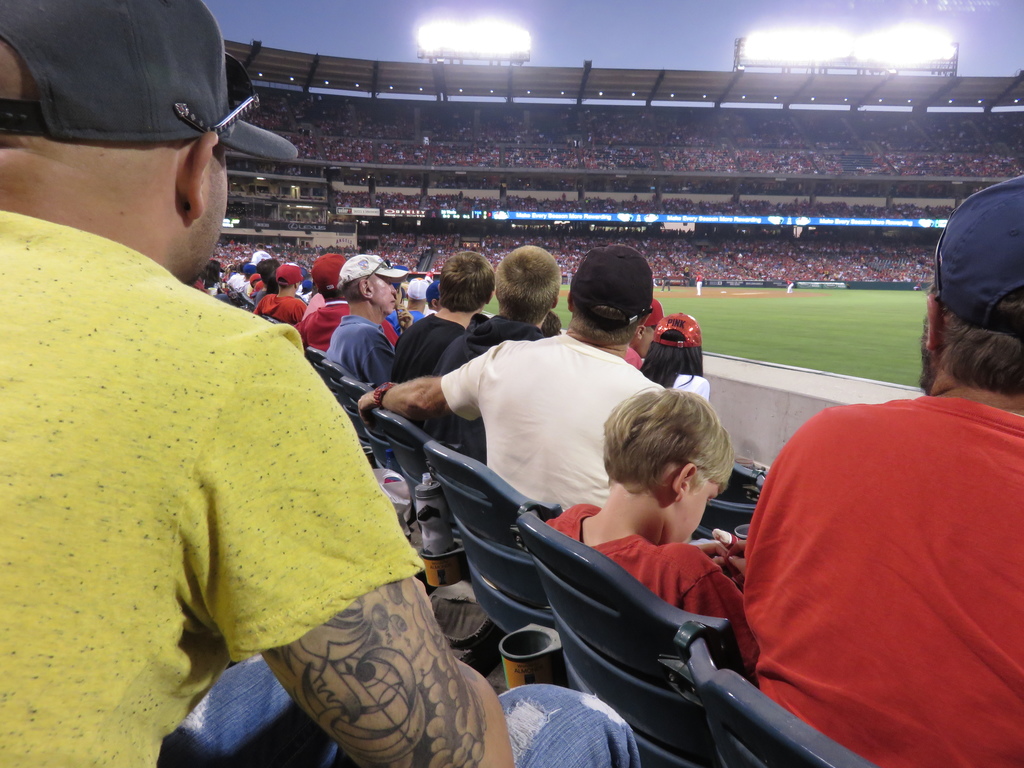 I had an Angel dog that was nothing special. I also had a couple of brown ales from local craft brewery Golden Road that were awesome.

On the night we were there, the Angels were sadly shutout so there was not much to cheer for. However, the videos showing the Rally Monkey were hilarious, especially the one in which the monkey was inserted into the showdown scene in “The Good, the Bad and the Ugly” featuring Clint Eastwood.

After a whirlwind trip to Venice Beach and through Hollywood in which we got to experience the infamous LA traffic, we headed to Chavez Ravine for the Dodgers and Padres match-up on Friday, July 11th.

Our way into the parking lot was very reminiscent of the Griswolds’ entry to the Wally World parking lot. It seemed massive, especially because my home ballpark, Wrigley Field, is literally 10 feet from Addison Street. 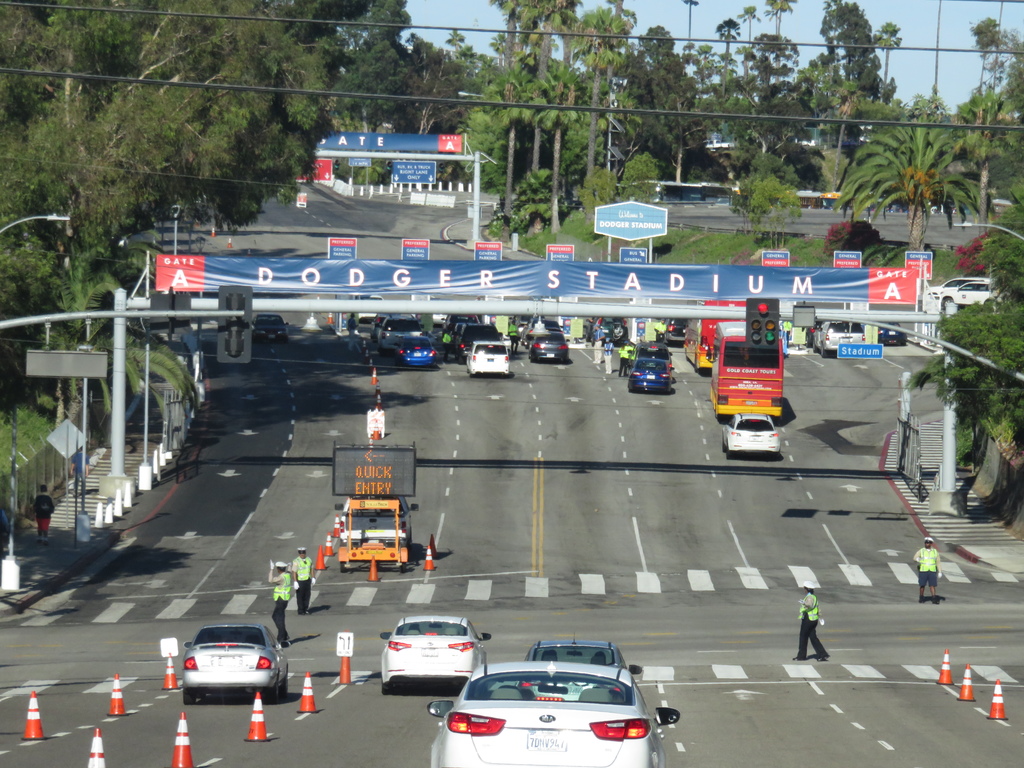 After parking the car, we made our way up towards the entrance and eventually to a long escalator that deposited us at the gates to the upper level. I had no idea that the stadium was built into the side of a hill and was surprised to learn that we were entering the park right at the upper deck concourse level. Seeing the field for the first time and the mountains that lie beyond was magical. The game started just about the time that the sun fell below the third base side of the park, basking us in a welcome shade.

Although I’d read that Golden Road was also available at Dodgers Stadium, I was not able to find it in the upper deck and had to settle for a gigantic can of Coors Light. After all I’d heard about the Dodger Dog, I was slightly disappointed to find that it was a good, but not otherwise memorable, hot dog.

We had a nice view of legendary broadcaster Vin Scully calling the game. 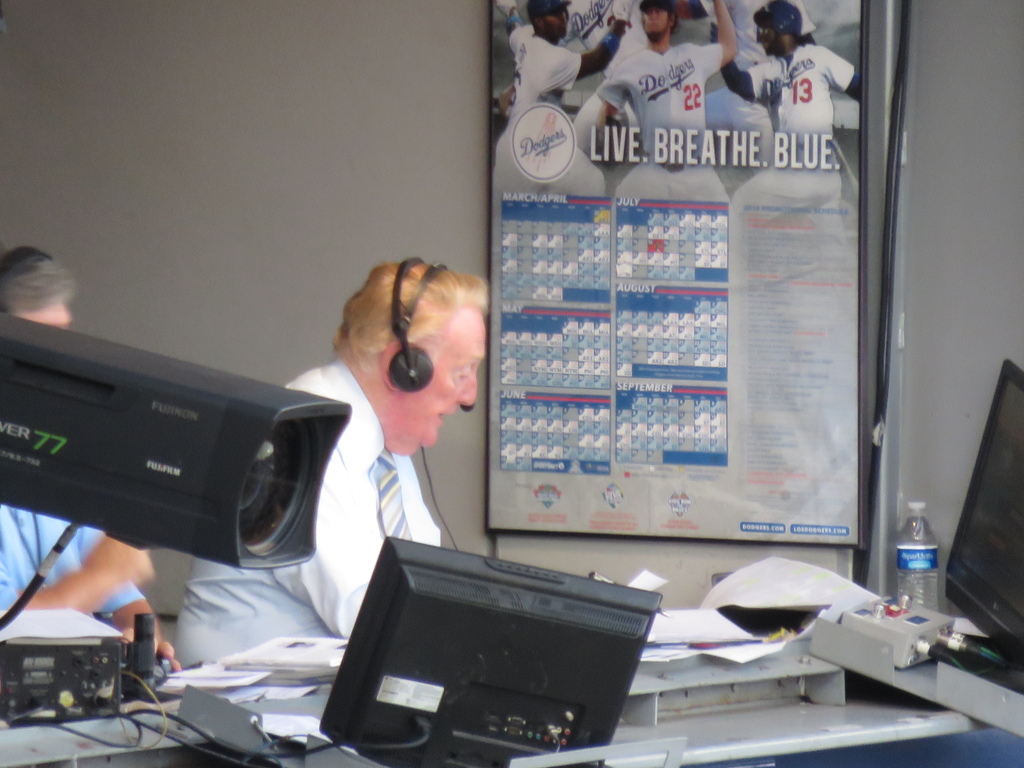 We enjoyed a beautiful sunset that lit up the sky over the park. 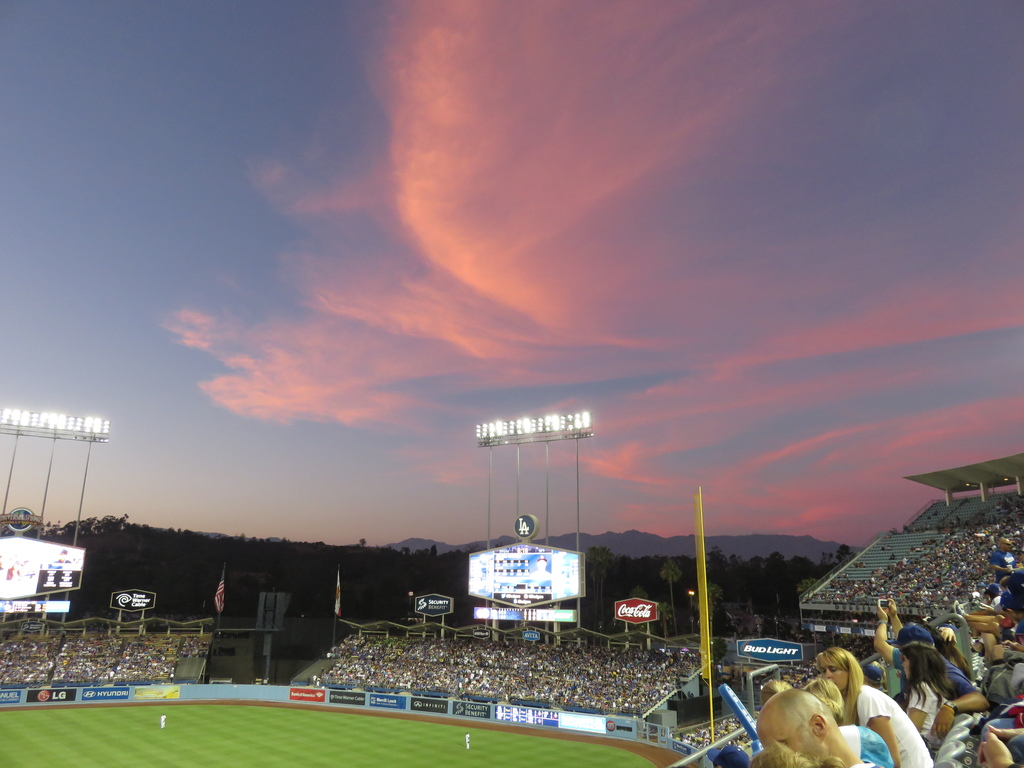 After the game, there was a fireworks display that the Dodgers let fans watch from the outfield grass. Frankly, it took three times as long to get the folks onto the field as the fireworks display lasted but the show was worth the wait. It was also very cool to be in the park with all of the lights off. 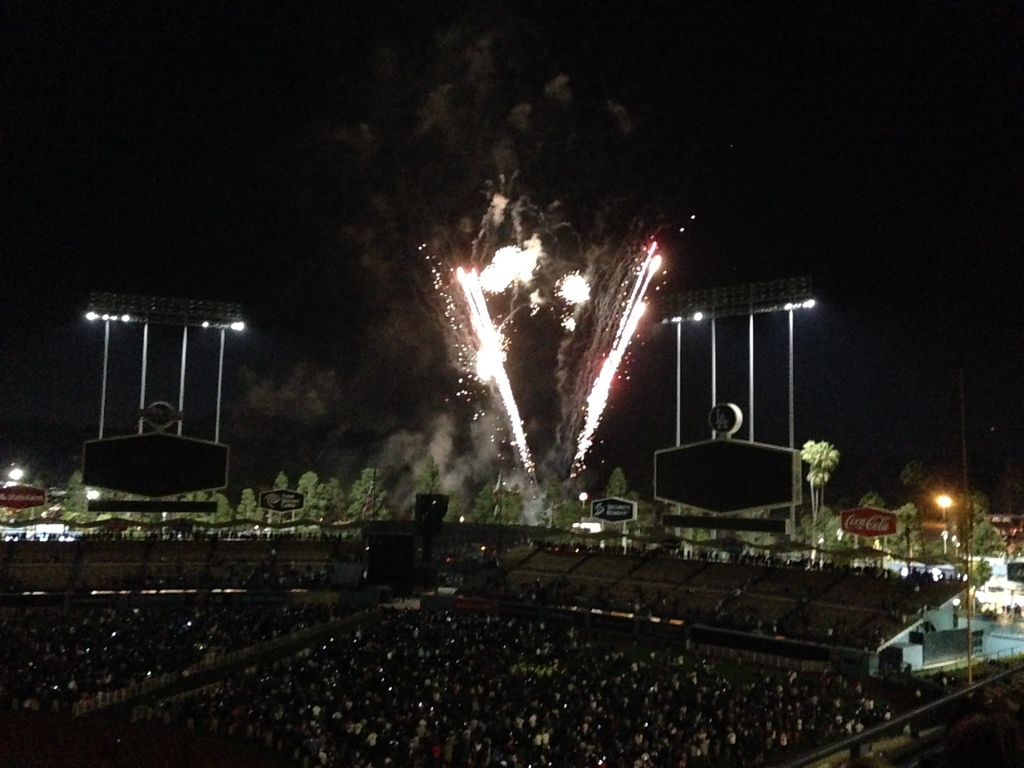 Just a quick 10 minute ride from the San Diego Zoo, we stopped near Petco Park for a delicious lunch at the Southpaw Social Club. My ulterior motive was to see Petco Park, even though the Padres were not in town for a game. (Accordingly, I do not count this on my list since I have not seen a game there yet.)

Petco seemed huge from the outside, rising high into the air in the area behind home plate. 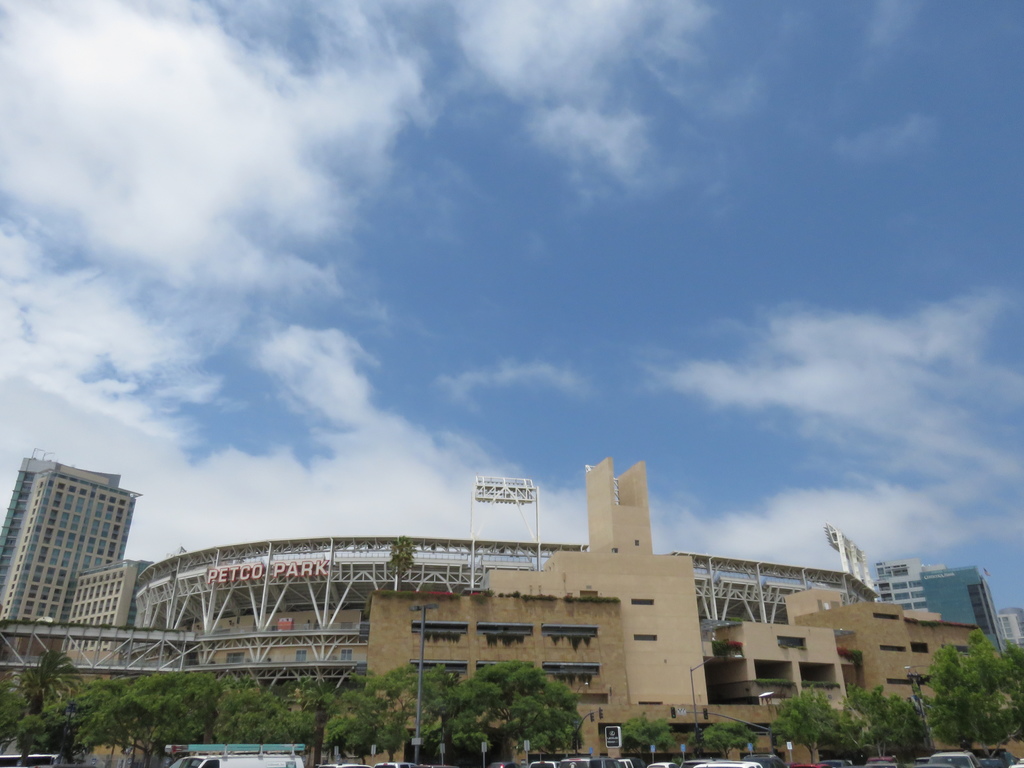 Beyond centerfield is a park, however, that was open and allowed you to get all the way up to the outfield fence. The park features a Wiffle Ball field apparently sponsored by Bumble Bee tuna and the Tony Gwynn statue. 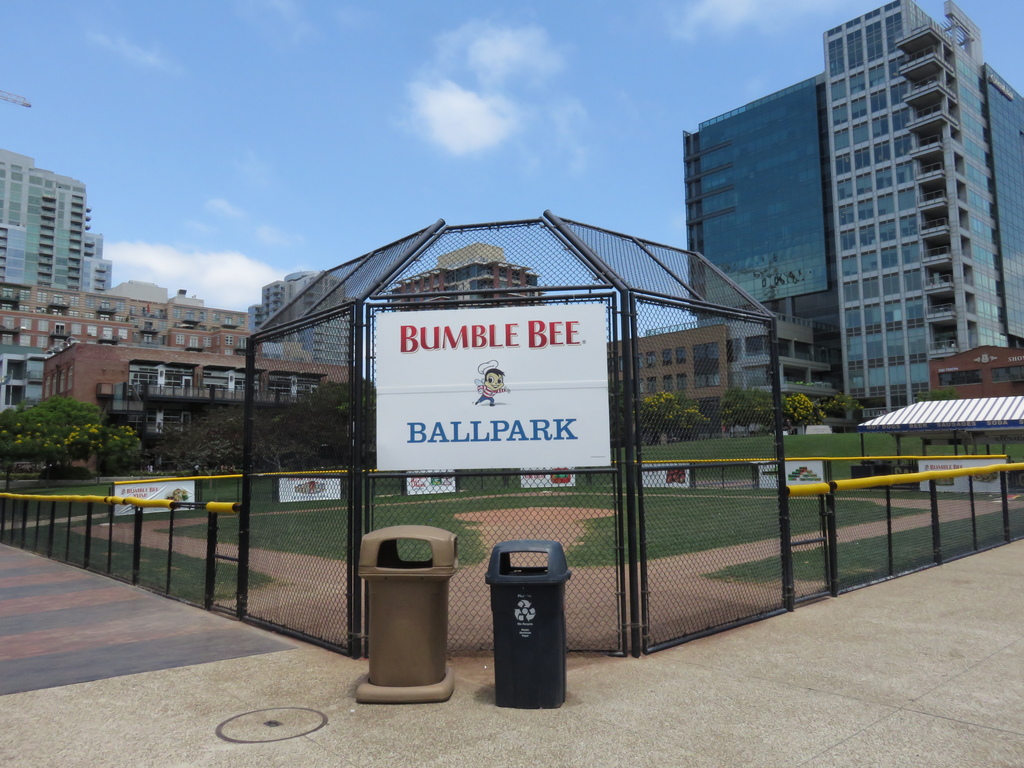 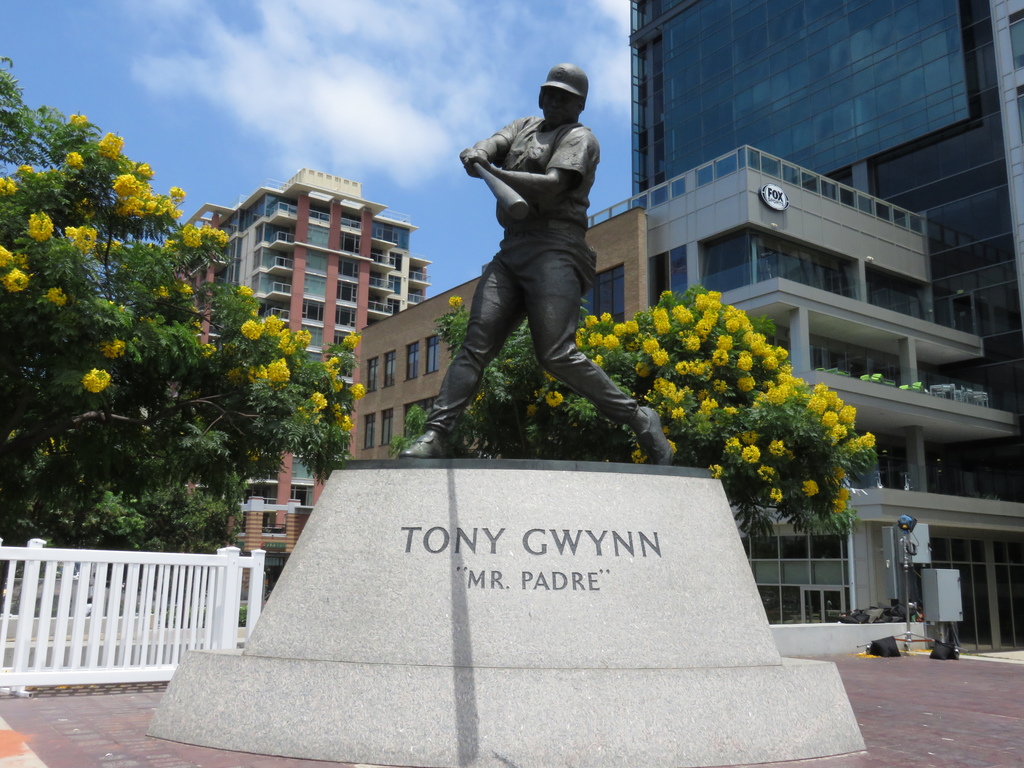 There is a row of Adirondack chairs along the edge of the fence that are reserved but the rest of the sandy beach area and tiers of bleacher seats appeared to be available for whomever if a game was being played, although they did not offer any view of plays in left field or right field. 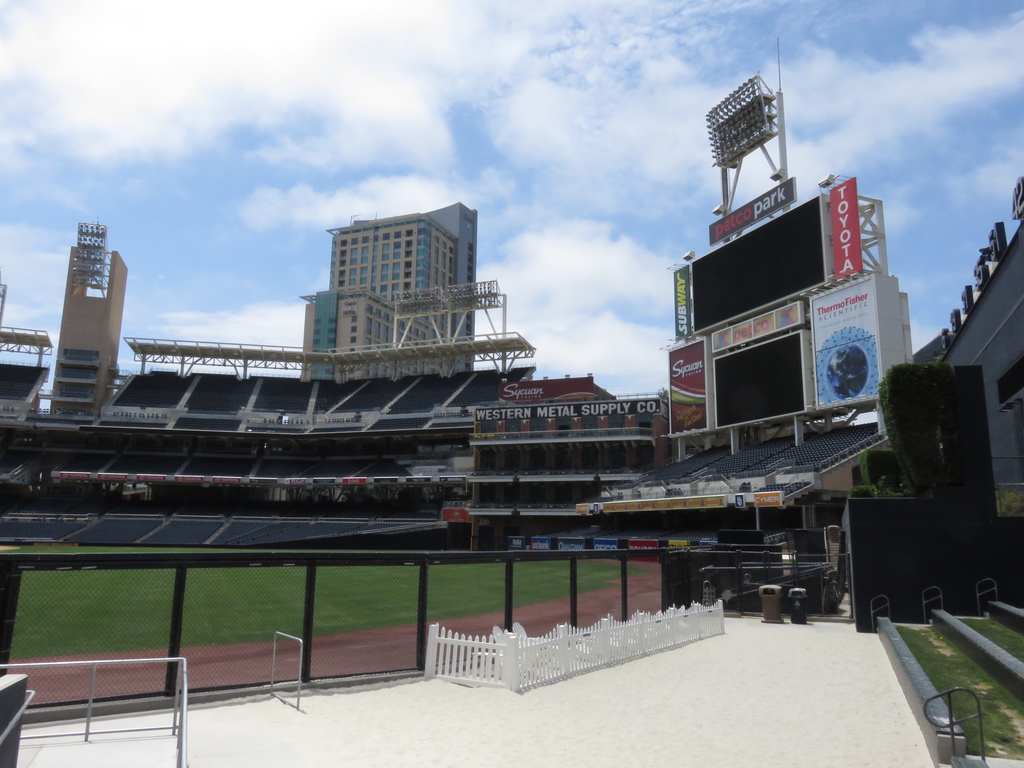 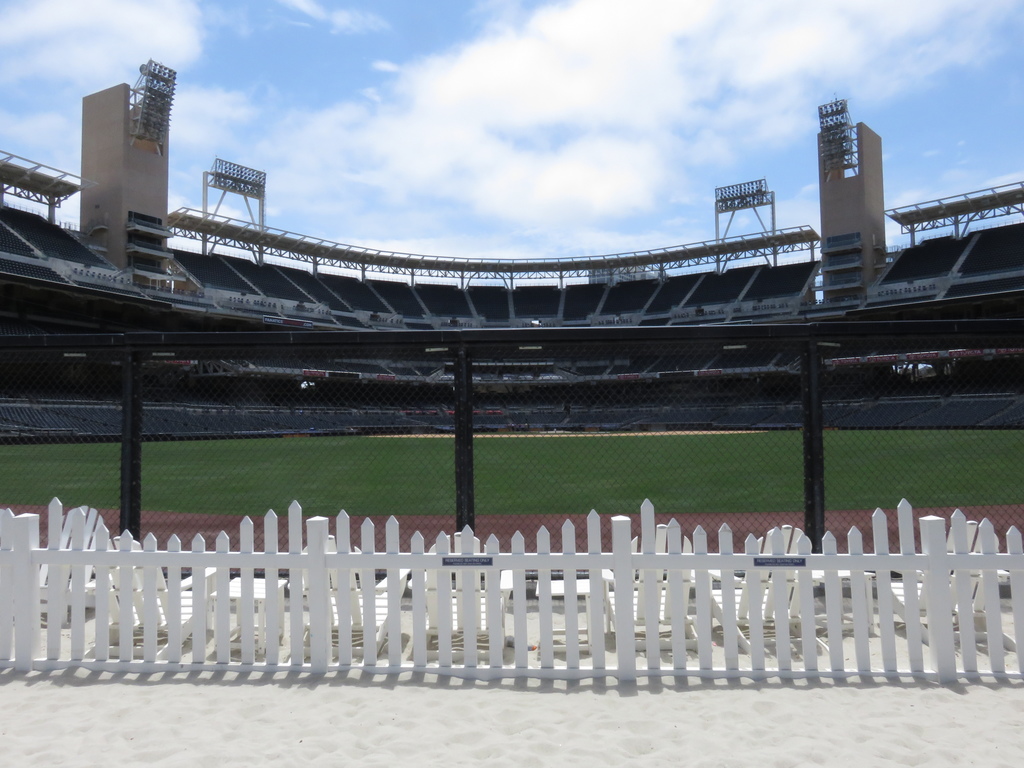 I found the Southern California weather quite agreeable and can’t wait to get back to take in a game at Petco.

Great pics and recap, John. Thanks for posting! How was the cerveza?