I recently got back from an awesome road trip in which I drove about 7,000 miles total. I visited a lot of friends and family, saw and did some incredible things, and of course, went to a bunch of different ballparks.

Coming into this year, I had seen 8 current MLB parks and no current minor league ones, plus 4 defunct MLB parks and 1 defunct MiLB park. On my trip I saw a total of 11 games in 10 different parks - 8 MLB, 2 MiLB. Of these, 5 of the MLB parks were new to me and both MiLB parks were new to me. I thought I'd offer a bit about my experiences in case anyone is going to any of these parks in the last few weeks of the season, or just for general interest. I'll probably divide this up into a few posts so that each post won't be super long.

I started the trip on Friday, July 10, by going to Wrigley Field and sitting in the bleachers. I had been to Wrigley when I was a kid, back in 1999. So it was really cool to see it again, especially because the older stadiums didn't really stand out as much back then (for example, my Tigers still played in Tiger Stadium that year). The idea of the view from a seat being obstructed by a support beam or an overhang wasn't at all unusual then. Neither was a manually-operated scoreboard, a feature I'm really glad they kept when they did the renovations earlier this year.

Now, it is like taking a trip back in time when you go to Wrigley. I got there about half an hour before first pitch, so I ended up in the center field bleachers. Soon enough, "Purple Haze" started playing as that day's Cubs starter was Kyle Hendricks, and my road trip had officially begun.

My experience with the bleachers was that some of the fans really were into the game, while others just seemed to be there to party. It almost felt like being at a college football tailgate - I'd say Wrigleyville before a game has that same feel. I got a bit of friendly ribbing about my Tigers gear, which I appreciated.

Overall, it was fun and the fact that it was Cubs vs. White Sox added to the rowdiness, I think. The White Sox won 1-0, thanks in no small part to the Cubs hitting into double plays in each of the first FOUR innings (I've never seen this before). Carlos Rodon got the win, while Kyle Hendricks took the loss.

Following this day game, they had a post-game concert, which was a nice touch. Word to the wise, don't make the rookie mistake I made in paying $40 to park near the stadium (this was a couple days before I discovered this site!). Find somewhere to park further away and take the L.

The picture below is a view from where I sat. I went back to Wrigley the next day with 2 friends who live in the Chicago area. We were pumped to see Jon Lester vs Chris Sale, one of the most intriguing pitching matchups you'll get in Interleague play. This time, we sat in the upper deck, section 436, which is between 1st base and the right field foul pole. The fans in this area seemed to be more serious about the game than the ones in the bleachers the day before. The Sox won again, this time by a count of 5-1. An error in I believe the 6th inning by the Cubs led to 3 White Sox runs and turned it into a fairly easy win for them.

One thing I noticed is that access to concessions was actually worse in this part of the stadium. You have to go all the way down a couple of ramps onto the main level, and the lines are going to be long. That's part of the deal with an older ballpark, though. It is just part of the experience.

I've attempted to show you how crowded the concourse gets in one of the photos below. Also included are a view from our seats and a view of the center field scoreboard, one of the features that makes Wrigley unique in this era. 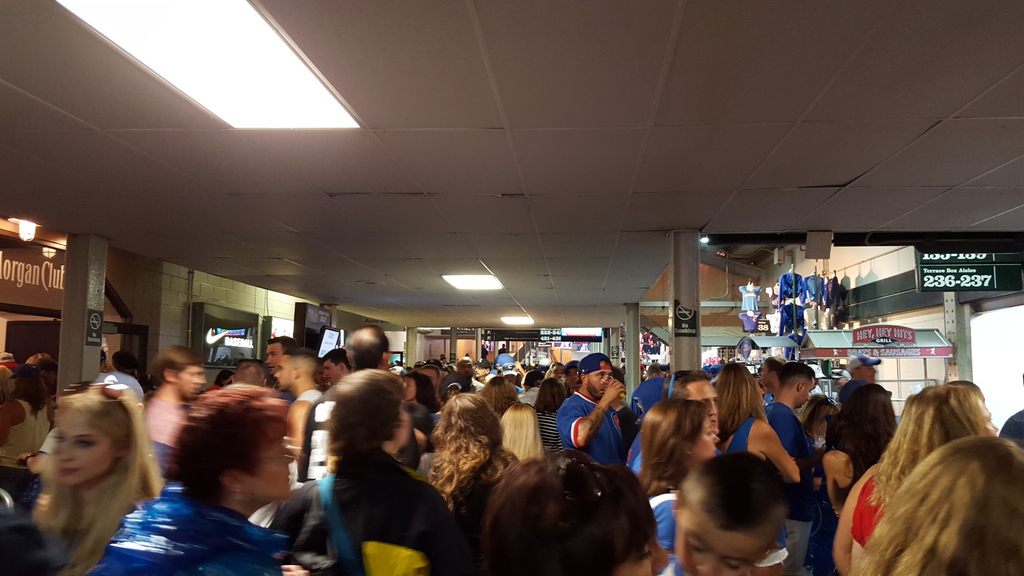 Overall, I'd rate Wrigley Field pretty highly, and recommend it as part of any trip you are taking to the upper midwest. You could easily also get to US Celluar and Miller Park on the same trip, if the schedule allows. Got a couple extra days? Drive a few hours east from Chicago and check out Comerica Park, then drive about three hours southeast from there to Progressive Field. Both of these are fine ballparks as well.

I'll let this one stand alone. Tomorrow I'll come back and write about the next couple of ballparks I went to on the trip.