After the 2 games at Wrigley, I figured my next ballpark would be Chase Field in Phoenix, just after the All Star Break. I wanted to find out something about the park first, and that's when I came across Ballpark Chasers. This site has turned out to be an incredible resource!

In 2012, I was at a Tigers game with my dad when he asked me if I was going to try to get to all 30 MLB parks. That's when the idea started to really appeal to me. We had been to a few when I was a kid and I had been to a few more since, but at this point I went from going to a park if its team happened to be in town when I was in town, to making a point of getting to as many as possible. Little did I know, there are all these people out there who are doing the same thing. Very cool!

Anyway, the 3rd game I went to on my road trip was at Chase Field on Friday, July 17. This was my first visit to the stadium (and to Phoenix). The D'Backs fell to the Giants in extra innings, 6-5. Being that it was a 5-hour game and I paid $50ish to sit just to the right of home plate, about 20 rows back, I definitely got my money's worth. Not only that, but the stadium has some of the best concession prices I've seen in MLB (a hot dog for $1.50?!). It seemed to have quite a variety as well. After the first couple of innings, I walked all around the concourse to take it all in and see a bit of the action from different vantage points. Below is a view from my seat as well as from behind the lower level outfield stands. 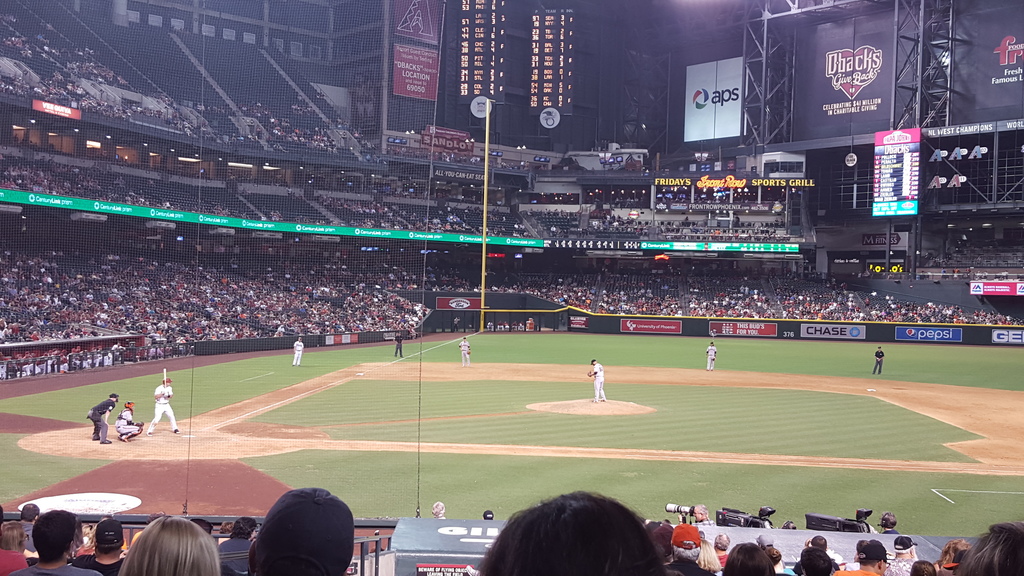 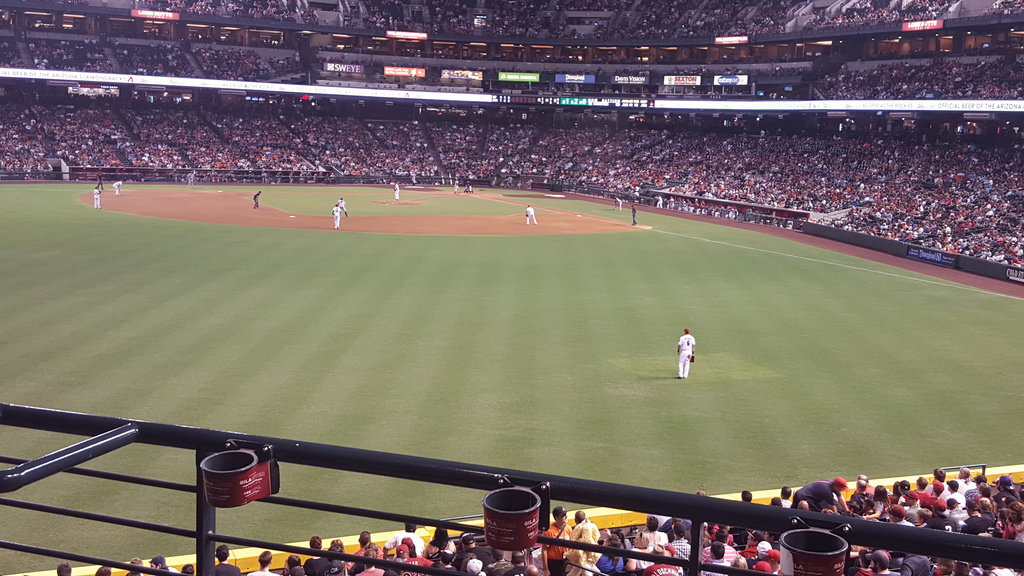 While it was strange seeing indoor baseball (hadn't done so before), this was a positive given that it was 105 degrees out. At one point, there was a thunderstorm and a leak in the roof caused it to "rain" just behind home plate, which was memorable. What else did I like about Chase Field... the video board was one of the most detailed I've seen in terms of player stats, the fans were friendly, and I paid only $5 to park about a 5-minute walk from it. It seemed like there wasn't much immediately around the stadium, but a decent variety of places to eat a few blocks away. I ate at Alice Cooper'stown, which was a decent meal and full of really cool sports memorabilia.

The only downside I can think of is that there just doesn't seem to be a lot of excitement about the D'Backs. I'm sure this is a combination of it being a fairly new team, a lot of transplants in Arizona, and the team's lack of success in recent years. On a Friday night, it was about 2/3 full, and easily half of the people there were Giants fans.

Overall, Chase Field is a great place to watch a game with a lot to like and very little not to like. Comfortable seating and budget-friendly prices are easy to find. Whether you get to the park by light rail or just by driving downtown and parking, you will be able to do so quickly and without spending much. This was my 4th ballpark this year (having been to Comerica Park, Progressive Field, and Wrigley Field earlier) and 9th overall in terms of current MLB parks, and I will definitely be going back as soon as I have the chance.