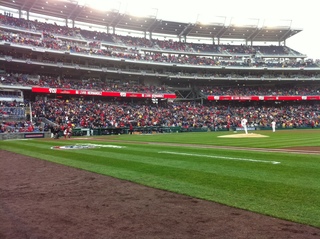 The 2011 MLB Opening Day finally arrived, but the Washington, DC weather did not get the memo. The day started off with sprinkles and turned into a balmy 41 degrees.  Sofia was looking forward to a little baseball, but because of a cold and an un-cooperating mother nature, her Opening Day will be delayed.  But the 30 Ballparks and a Baby family was not shutout. Dad weathered the storm and got unprecedented access to the pregame ceremonies.

The pregame ceremonies began with the induction of legendary sportscaster James Brown, former Redskin and radio personality Brian Mitchell, and ½ of PTI Michael Wilbon, among others, into the Washington DC Hall of Fame.  The induction was followed with roaring cheers as Nats fan favorite, Ryan Zimmerman, received his 2010 Louisville Slugger Silver Slugger award.

In contrast to Zimmerman’s cheers, recently inaugurated DC Mayor, Vincent Gray, received deafening boo’s as he kicked off the Nationals’ 2011 season with “Play Ball”. With the response that Mayor Gray received, he is going to have a tough four years and I hope his self-inflicted misfortunes are not those of the Nationals.

Werth, Herndandez, Pudge and the rest of the Nationals played a great game.  Jason Werth got on base in his first at bat as a National, but the Braves just had a tad more juice on this day. The Braves scored early with a Brian McCann single that scored future Hall of Famer Chipper Jones in the first inning and in the second inning, Jason Heyward hit a solo homer.  The 39,055 fans in attendance watched the Nationals lose 2-0, but from Coach Riggleman down, everybody agreed that the Nationals played exceptionally well.

With this competitive team that was assembled in the off-season and haven watch their Opening Day, the Nationals should have a solid 2011 Season.

For more info check out: