I am new to the site. I apologize if this topic belongs in another thread.

But I am seeking recommendations for noteworthy historic minor league ballparks throughout the country.  I will be taking a ballpark tour next year including minor leagues, but I don't want to stop at just any stadium. I'm interested in some of the older ones. I would be particularly interested the northeast, but all over the country as well. I have been to Centennial Field in Burlington and thought it was fantastic.

In recent years I have traveled to a few of the newer minor league stadiums. With some exceptions, I found it's not entirely worth the time. But when I find the right stadium, it makes it all worth it in the end. Thanks for your responses.

I did some research and compiled a list of the oldest minor league parks which are currently in existence in AAA, AA, and A ball.  Here are the 20 oldest stadiums which were built between 1906 to 1960.  My source was wikipedia.

*some of these stadiums may have been renovated to an extent where the historic charm is gone, for example, Modern Woodmen Park (Quad Cities River Bandits). This is not to say that it is not still a nice stadium.  But those seeking a historic experience might be disappointed.

If people have been to any of the above parks I'd be interested in hearing your thoughts.

There are also some noteworthy old parks in the Appalachian and Pioneer leagues not included on the list.  But I would love to see Bowen Field (Bluefield, WV) and Kindrick Field (Helena, MT) amongst others.

Went to a game here in 1997 and had a good time.  It was $1 hot dog, soda, and peanut night.  I recall I had difficulty with directions and getting around in Reading.  In re-reading my notes I state ‘ this is what a real minor league ballpark should be like.’  I suspect there have been  updates to the ballpark since then.

My trip to Avista Stadium

Went here in 2011 and had a superb time.  The history of the Spokane Indians and the Spokane Tribe are displayed wonderfully at this stadium.  When you walk in the gate go to your right on the concourse and there’s several walls with plaques and information.  There’s a Rim of Honor and an Indians Hall of Fame Plaza.   Avista Stadium has plenty for the baseball history buff so if you ever get to the west coast, do stop at this one.

My trip to Cheney Stadium

Was here last summer also.  This stadium went through a major renovation just prior to the 2011 season.  I, personally, did not like the city of Tacoma, yet I had a very good time at this stadium.  There is a Tacoma Baseball Hall of Fame (plaques on the concourse - first base side if I remember correctly – recognizing players and individuals who influenced baseball in Tacoma).  Again, if you get to the west coast, the ballpark is worth a visit even if the city isn’t.

My trip to Grayson

I visited here in 2001.  I don’t recall seeing a whole lot of history.  I found the netting and chain link fence around the entire seating area very distracting.  To me, the stadium felt old; not historic.  Things could have changed since the time I went.  The city of Savannah is a great tourist city.

A review of McCormick Field (not mine)

I went here in the late 90’s/early 00’s.  This stadium, too, had netting and chain link fence around the entire seating area.  However,  this stadium felt much more historic than Grayson.  I understand there is new ownership of the team and that they are very devoted to the history of this park and to the town.  Asheville is another great tourist city.  Hope you get to make the trip someday.

If you do go, take the hour or so drive down to Greenville, SC and see the new Fluor Field at the West End, home of the Greenville Drive – (A-South Atlantic) as well as the Shoeless Joe Jackson Museum.  Although that stadium is new, it does showcase a lot of baseball history.  My trip to Fluor Field

They've changed Savannah's park.  It does have a historic feel to it now and it is a great experience.  Does have an "old" feeling to it somewhat, but really that is their charm.  I still would go there over Chattanooga.  :)

4. Asheville's stadium is phenomenal. If you do not make it to Bluefield then make Asheville your destination. The town itself is lively and worth at least a day stop.

8. Hagerstown Stadium was basic and nothing to write about. In fact I thought it was quite boring (Danville Braves is within this catagory)

10. Because there has been chatter of Lynchburg moving somewhere else this stadium is on the threatened list. It's been remodeled several times to at least a decent ballpark however the season ticket holders suck. I actually had to move because the couples in front of us would not stop talking on their cell phones. Even my son asked me to tell them to, "Shut up!"

11. With all the talk about San Jose being the stop for the A's the SJ Giants will cease to exist if this comes to fruition. As for the stadium there really isn't much to see or do around the stadium unless you come when the SJ Sharks are practicing down the street. But there are couple of historical sites down the street as well as the Winchester Mystery House nearby.

12. The only currently operational stadium that is built backwards. There's been rumors for years about the Blaze moving out of the stadium to new grounds or potentially the Carolina league (will happen sooner than later). Not much to see or do but if you catch a night game take a picture of the angle of the sun and the players for your your non-baseball fans.

14. The only thing redeeming about Pawtucket is the inability to get autographs. Famously you to lower a bucket or another device down to the dugout in the hopes of getting an autograph.  This is stadium is usually on the most hated list because of this.

15. Visalia stadium was much better before they remodeled in the past few years. They used to have this berm behind home plate that would separate it from the rest of the stadiums. It was unique and hid much of the food vendors behind it. However, as much as I don't like the stadium itself, I would rate this stadium among the top five of baseball parks for the best food. There's a guy that used to cook barbeque there and his food was absolutely phenomenal.

16. For Vancouver I don't consider this an actual visit because there was no ticket distribution (my rule), and it was a college game. But only in Canada would they have have baseball sayings about striking out and women in the men's bathroom.

17. Basic stadium and not worth the trouble unless you have to mark it off some list.

18. Probably the one MILB stadium that I've seen that incorporates it's history with modern conveniences. Worth the effort to go.

Hopefully this helps in your travels.

Did you ever make it to #6, Jackie Robinson Stadium in Daytona?

I made it up there last month and really enjoyed it. Stadium was definaly old, But all of the seats were covered, and then the 3rd base side was all bleachers, used to be concrete, but they'd added metal benches to them at some point, but they were still fairly confortable. The stadium had a nice ocean cross breeze, so it wasn't too hot, even in the direct sun. And the backdrop behind the wall was of palm trees and the intercoastal and the bridge across the intercoastal.

Food was ok, nothing special. Did enjoy the food vendors walking the stands. They seemed to know most of the locals and would have conversations with them. They also had a pretty good arm for throwing peanuts and throwable food items across the bleachers.

1) No video board or any stats board at all. Which, wasn't as bad as I thought it would be once the game started, as it kind of fit with the feel of the stadium.

2) Netting around the entire field. Not a big deal, unless you want a foul ball. Only place to get one would be in the bleachers down the 3rd base line, and hoping for a pop foul. Line drivers would be stoped by the fence all along the field down the 3rd base line, a good 10-15 feet high. Behind home and down 1st base line, the netting went all the way up to the awning, so no chance of any foul balls over there. It also made it hard for kids to enteract with the players and get balls thrown to them as well.

There was a Jackie Robinson museaum that was kinda interesting. Didn't look at it too long, but it's worth checking out if you're there.

Went to Grayson Stadium back in 2010.  Meg made a few comments about the chain-link fence when she went, but I didn't see it anymore.  They were building a party deck along the 1B side, thus making it like an incomplete feel to it somewhat.  But it is an amazing stadium with a very classic feel to it.  If you have gone to it, disregard this response, but if you haven't gone to it, you will love the experience.

I would absolutely, absolutely put Rickwood Field on your list. Some of the other posters have discussed this as well but I've had the opportunity to play on the field and it is absolutely the best place to see/play a game. On non-game days it is free to tour and explore and you can even play catch or a small game if you have enough people. Just think you're playing on the same that Satchel, Jackie, Hank, Babe and many others had the opportunity to play on.

I'll admit it does show its age but it exudes baseball history. Take the time to see a game there.

Great thread.  I hope to make it to many of the stadiums listed here.  Two stadiums that I would include, though they are not affiliated with the Majors, are Bosse Field in Evansville IN (1915) and League Stadium in Huntingsburg IN (1894).  The Evansville Otters are in the Frontier League and the DuBois County Bombers are in the Prospect League (Collegiate League).  Both of these stadiums were used in the movie "A League of Their Own".

As far as 'historic', goes, there are two that I've been to that really stand out. First is Historic Grayson Stadium in Savannah, Georgia. It's home to the Savannah Sand Gnats, and really a neat little stadium. It has great atmosphere, and is a fun place to watch a game. The other one is McCoy Stadium in Pawtucket, Rhode Island. Home of the Red Sox, or PawSox, McCoy is a fantastic stadium to visit. The fans and staff are very friendly. I highly recommend both.

I will revive this two year old thread with some pics I took from a couple of the stadiums I've hit up. McCoy Stadium in Pawtucket was remarkable in every way, and ideally situated next to a great city, Providence. My experience in Reading wasn't as great, seeing a ballgame on a freezing cold April night. The cold weather may have influenced my thinking that The AA-Phillies stadium was not as remarkable. 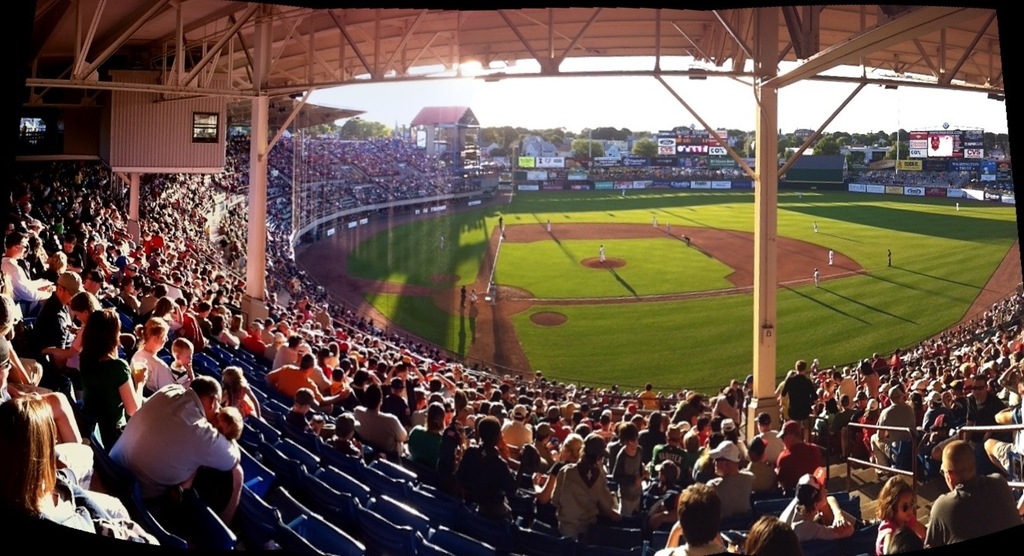 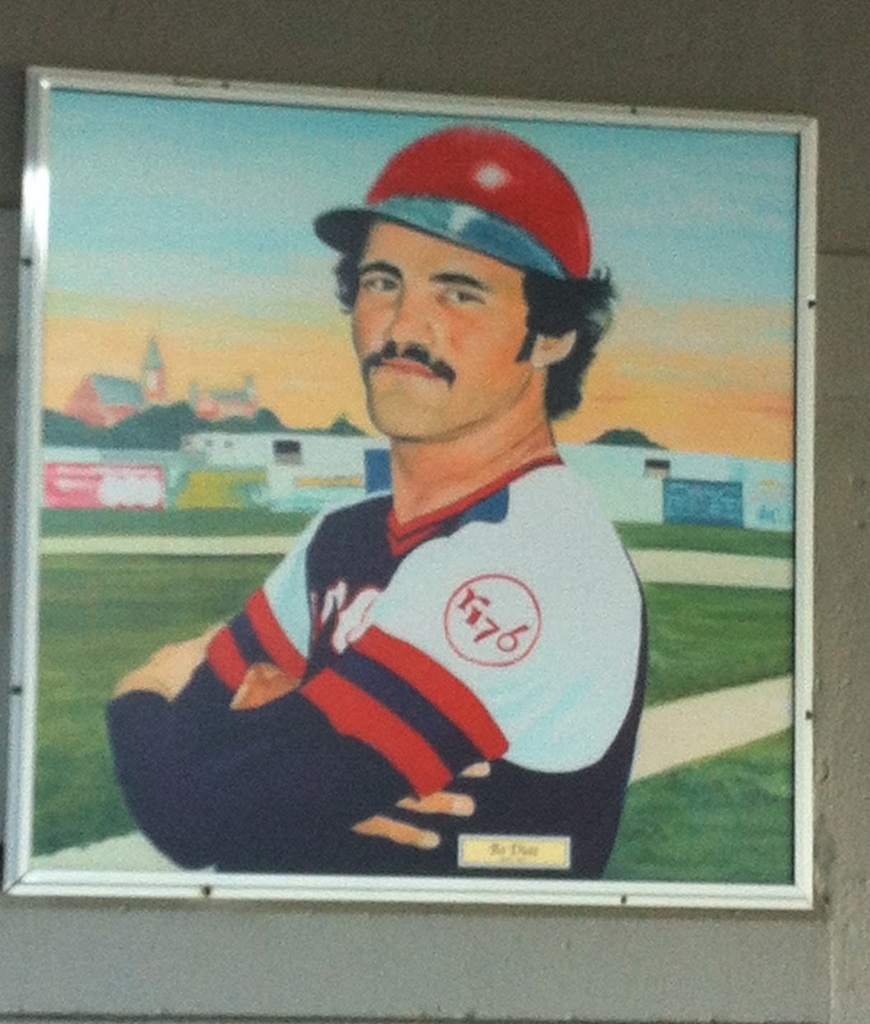 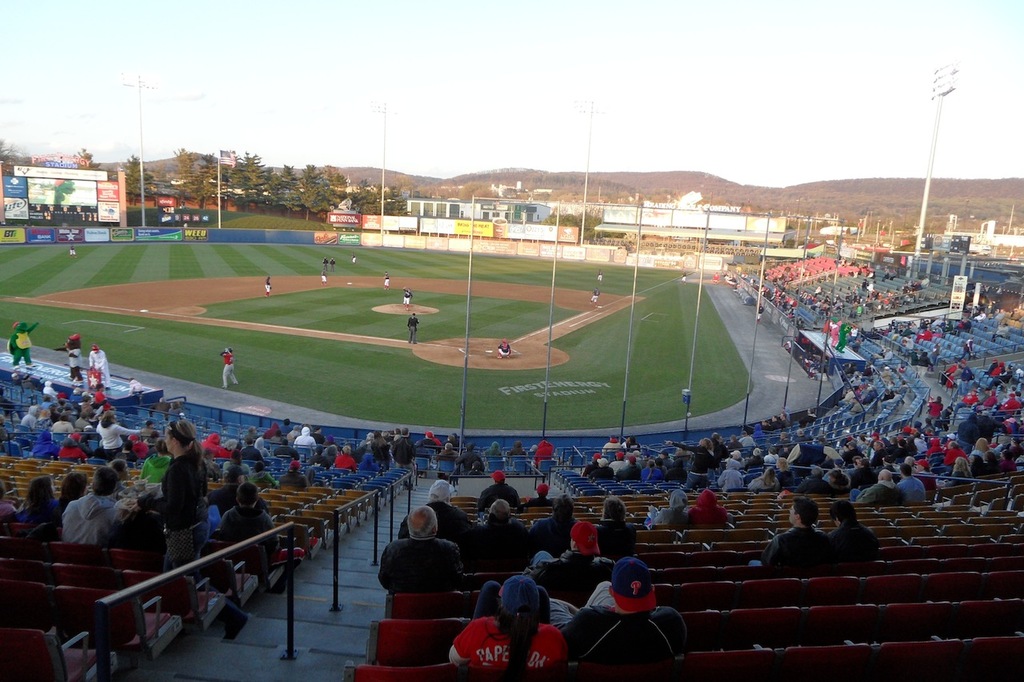 I never did manage to make to the Appalachian league. Maybe next season.

I went to McCormick field in Asheville this summer, too. It is an amazing stadium. 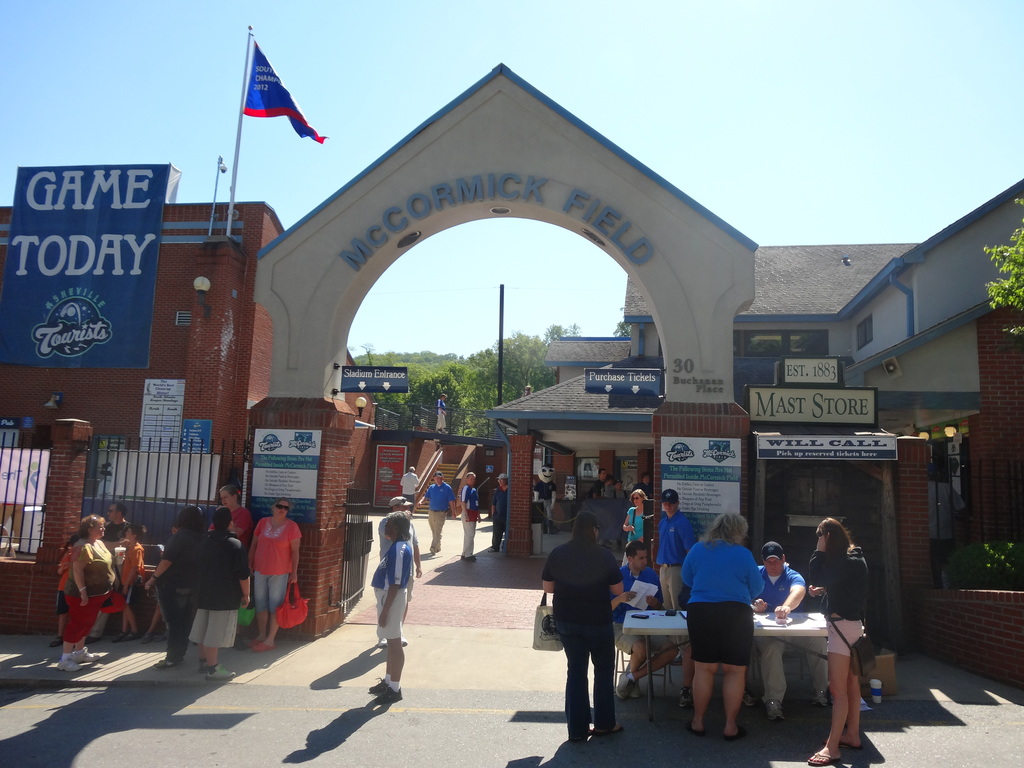