OK everyone, anyone who has a favorite money-saving tip that they don't mind sharing, can you bust it out for your fellow Chasers? It doesn't need to be a secret thing, or a major league ballpark or anything, just talk about a place where you save on parking, or a food item that gives a lot of value, or a way to save on tickets that most people don't know about.

Full disclosure here though: if you share a tip, it may find its way into a future "Ballpark E-Guide" (see www.BallparkEGuides.com)! So if you don't want a lot of people to know it, I wouldn't share it.

I'm starting everyone off with three good ones:

- At Citi Field in New York, the Southfield commuter lot where people park before taking the 7 to work in Manhattan is $19 on game days (well, it was in 2010), but the game rate doesn't kick in until 9:00 AM for day games and at noon for night games, if the policy is still what it was last time I checked. You will have to occupy yourself for a few hours; shouldn't be a problem in NYC.

- At Yankee Stadium, you can get the "possible obstructed view" seats for $5 as of this writing; they are the seats near the Mohegan Sun restaurant that block a portion of the outfield. In the first 4-5 rows though, it's not a problem at all, and if you know how the seating works you can best avoid the obstruction. Just $5 to get into Yankee Stadium!

There you go, that's three...I know all of you have some sort of a "tightwad tip" you wouldn't mind sharing...c'mon, pass it on!

You ain't kidding Jack...that is a shock. I assume the Yankees are going to continue with that price in 2011, I'll let everyone know if not.

Since I started researching this stuff, I can tell you I've so many kick-myself-in-the-head moments you wouldn't believe it. For example, Miller Park and Turner Field both have $1 seats. The Orioles give you a free ticket on your birthday. The Phillies have a long list of promotional nights with discounted tickets. There are places to park for free at Mets games. It goes on and on.

If you're interested in finding some more tips, you can check out my website: www.BallparkEGuides.com. The PDF-format download guides are $5 but I promise you it will pay for itself. If you're not ready to purchase anything yet, there's a blog there that also has a few nuggets of info free of charge.

That is pretty unreal for Yankee Stadium.

-My tip (as seen in our Chaser Guide) is free parking at Safeco Field. Find the intersection between 1st Ave. S. and Holgate Street. Behind the Paper Zone store is an alley that has a long strip of free parking. You have to come to the park at least 90 minutes before the first pitch as these fill up quickly!

Permalink Reply by Aron Lecea on February 8, 2011 at 9:22am
I hope will help somebody, but big money saver tip is for all my trips I buy all my tickets on eBay ,there are always good tIckets at a good price. My last trip to Cleveland got a pair of tix for $35.

Permalink Reply by Craig (17) on February 8, 2011 at 9:08pm
I have always been curious about eBay for tickets. I hear there are a lot of ticket scams. Do you only buy from big dealers with a lot of high rankings?

Permalink Reply by Aron Lecea on February 9, 2011 at 6:30am
I have been using eBay for about 7 years,but along with everything else there is good/bad,but I have only had good experiences,always be sure to check seller feedback on previous sales,and I only buy from sellers that use paypal that way you are protected in case any misfortune.I have purchased tickets this way over 25 times without any issues.

Incidentally Aron, since you brought up eBay, they are included among the resellers that the "SeatGeek" site searches. I highly recommend SeatGeek--they not only let you know everything that is available through StubHub, eBay, TicketsNow, RazorGator etc., they also include the fees of the ticket in the cost so there are no fee surprises. I really, really hate those extra fees they tack on after you commit to buying the ticket.

www.seatgeek.com (or if you don't mind, you can help my site out, since I have them as an affiliate - check the order/view sample pages at www.BallparkEGuides.com)

Once the novel is out please feel free to use any of the saver tips that you find in there.  I will give you two here.  For anyone that is on a road trip from one city to another-and are hoping to fly out of another city instead of one they flew in on.  (Like flying into Boston and flying out of New York) is the 24 hour airport rule.  You can save that dreaded one way drop off fee if you return to another airport within 24 hours of renting--you will pay 15-20% higher but save enormous fees that drop off.  i picked up a rental car in Los Angeles and dropped it off in Albuquerque--Since it was within 24 hours I only paid 35 dollars above what the normal daily rate was instead of $300 one way rental.

Also for New York City(to and from airport).  You probably already now this but there are a lot of sedan service one way trip for $49 fees that you can put up to 5 people in.  I am not sure they save that  much cash but it beats paying for rental cars, gas, insurance and parking-especially from.  Best quotes are www.limoquote.com

Permalink Reply by Kurt Smith on February 9, 2011 at 11:35am
Actually no, I didn't know about that...thanks Chuck, and thanks for the permission to use the book! By all means please let me know when it is available.

The designated driver program is an option at every stadium where I've known to look for it.  If you pledge that you aren't drinking and driving that day, you get a coupon for a free soda.

Also, different stadiums have different policies on carrying in food.  The policies can often be found on-line.  Bringing in your own bottle of water and hoagie (sub, hero, etc) can save quite a bit if you're going to get hungry during the game.

I've learned that unless I can afford great seats, I get the cheapest seats.  I'm kind of jittery and don't really like to sit that much, so I usually wander around the stadium and watch from different places, often with great views.  Some stadiums even have picnic type areas where you can grab a seat.  Cleveland has a little table area along the end of the first base line that was pretty nice.

Please be careful trying to find free parking at Citizen's Bank Park.  I've parked for free before, but I learned my lesson with a $51 ticket during an exposition game this week.  Philadelphia Parking Authority is no joke.

Permalink Reply by Kurt Smith on April 2, 2011 at 2:57am
Diane - excellent, fantastic tips. Not all ballparks allow you to bring in your own food; the Marlins, who play in probably the most miserable climate in baseball in the summer, only allow one bottle of water. But yes, most of them do. Unless you enjoy catching a bag of peanuts from the guy with deadly accurate aim at Fenway, there's no sense buying peanuts at the ballpark.

One caveat about the Designated Driver bit--the lines get very long in some ballparks for it, so you need to get there early. I remember not bothering to wait at Camden Yards because it was so long. 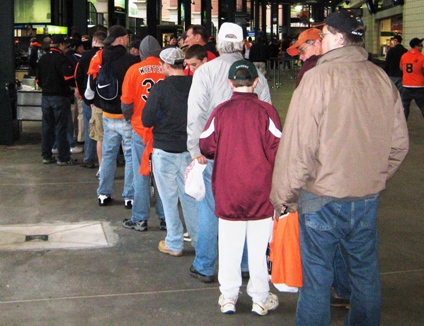 May I ask where you parked in Philly? I am familiar with the area and I know there are definitely some places where you will get a ticket, but I want to make sure that my tip in the E-Guide is valid. The last thing I need is for someone to get a ticket taking my advice...that would be very bad publicity!

Thanks for replying Diane!