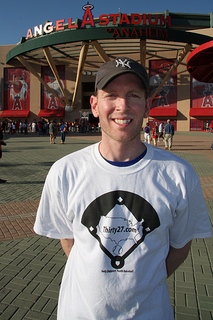 Josh, the leader of the thirty27 team currently resides in Redondo Beach, CA. And so far, the stadium trip hasn't taken him very far from there. On Sunday he flew to Seattle, and by Wednesday afternoon he was back in LA, and even had time to stop at his apartment. Teammate, Ken, even took a rest at his own apartment. (Ken would have napped if not for all those Monsters he drank)

Then, the boys took in the NYMets@LAAngels game. This game was huge for the Mets since it was Jerry Manuel's first win as the team's manager. It was also a comeback win, something the struggling team hasn't been able to do all year.

Immediately following the game, thirty27.com got on the highway to Phoenix, arriving at 3:15amPT. Josh had an interview scheduled with a morning show, so he got the requisite one hour of beauty sleep. Then, at 6:35amPT, he talked with AZFamily.com and 3TV. They did the interview outside, next to the official thirty27.com car. Josh rambled along through the interview, using his usual slew of cliches to describe the trip. 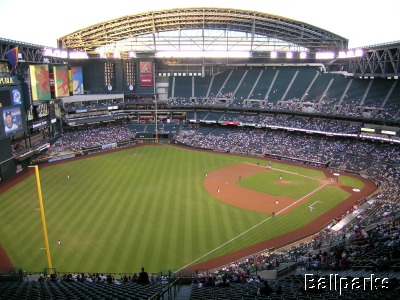 Some game notes from Arizona....
----The gametime temperature outside of Chase Field in Phoenix was reported to be 116F degrees. Josh's face burned to a glowing red color within minutes of touching the sun's rays.
----Josh purchased his 36th stadium pretzel of the trip, continuing his second goal of the trip,.... consuming an all carb and grain diet.
----The team was scheduled to be interviewed during the game on the FSN Arizona broadcast. However, announcer Mark Grace squashed the idea because he needed the time for his smoke break.

****
Immediately following the DBacks game, the team headed back to LA(again). Ken was dropped off at home and returned to working life today. I believe Josh slept in his own apartment, with his own wife. Today, now in need of a trip partner, he is picking up his sister, Danielle, and going to Oakland. Immediately following the game, the two will head back to LA(again). Tomorrow begins the craziest 24 hours of the trip in which Josh will pick up Bob at the airport, see a day game at Dodger Stadium, a night game in San Diego, and then those two will drive all the way to Colorado overnight to catch the Sunday afternoon game.