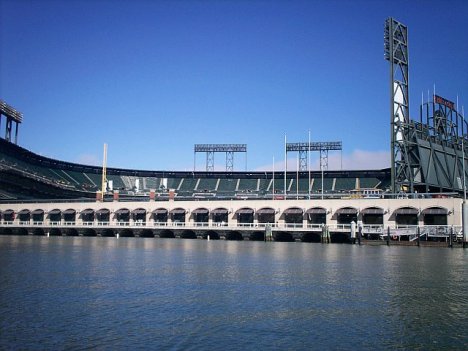 The SF Giants were among the 20+ ballclubs that donated tickets to the thirty27 project. They didn't give up cheapies either, sitting the thirty27 team in the 3rd row behind the Giants' bullpen mound. ****

Game notes from SF....
----Edgar Renteria (my main man from Colombia and my AL all-star vote getter), tallied his 2,000th career hit.
----Marcus Thames blasted a 450ft homerun.
----This was Josh's first visit to AT&T Park (I had to look up the name of the park, since all the stadiums are now sponsored by the same interchangable corporations, I can't keep them straight)
----This was Ken's third visit to AT&T Park. Or maybe it was his first, and previously it was called PacBell, who freaking knows.
----Jonathan Sanchez can thank Josh for jinxing his no-hitter last night. Josh decided it was a cool idea to send me a text reading, "nono thru five". Good job Robbins.
----A Josh favorite, Kenny Rogers ended up getting the win. Rogers earned the title of "Worst Pitcher in the History of New York City" by posting ERAs of 4.68 and 5.65 in two seasons with the Yankees, nearly costing them the 1996 World Series. Then Rogers moved over to Queens, where he proceded to walk in the winning run of the 1999 NLCS against Los Bravos.

I spoke to Josh during today's drive from SF to LA. Josh said he's never quite slept like he did last night, making up for the sleepless night before. Just wait until the end of this week Josh and see how you feel. Of course, Ken was still wide awake after drinking another 7 Monster's during the ballgame. In the morning, the team took advantage of the hotel breakfast bar, gathering food for their day trip, while Ken literally destroyed the waffle maker.

Since the thirty27 team is stopping in LA tonight, Josh has the chance to actually stop at his apartment. He is in desperate need of a belt. For his pants. I can't make that up. His shorts are falling down. Constantly.

Tonight the men visit Anaheim for a game against Los Mets and their new manager, Guissepe Franco. Thirty27 will add a third member to the trip for tonight's game, Kenny G. Kenny G. has had the unfortunate experience of working with both Josh and Ken K.

Immediately following the game, the team heads to Arizona, where they are due to appear on a Phoenix morning talk show.

I will say this, my biggest concern on the drive from Seattle to SF, was not falling asleep, or getting lost, but hitting a deer, moose, or bigfoot at 95mph. But I guess the highlight of the trip so far, at least my 5 days behind the wheel, was the gas stop at 3am in Oakland, OR (Try to find that on a map!) where it was a whopping 41 degrees, and our attendant (You can't pump your own gas in OR) looked like she actually lived in her little booth.

Comment by Tom Strickfaden on June 19, 2008 at 9:06am
Hey Josh -
You should have tried to get a Mickey D's sponsorship. After 3 or 4 days of eating Big Macs, you wouldn't need a belt to keep your pants up - haha! Godspeed Dudes!