One of the questions that hasn't been asked too often is, "How do you catalog your trip(s)" Most of us have photos, tickets, etc. But some have a quirky side as well, "I'm not leaving this park until I get a ball."

What do you do to catalog? What would you have done differently?

I take pictures, save my ticket stub, try to buy a stadium specific pin, and buy a hot dog/specialty sandwich and a beer.

We always get a logo ball and have a beautiful case to keep them in. I'm also getting a t-shirt for each team that I plan to make into a quilt. We also started a blog: http://sowasthescoreboardbigenough.blogspot.com/
mainly as a way for us to remember our journey.

I've been getting hats at every stadium.

A San Fran Cal fan? Now that rocks! I grew up an Orioles fan, one of about five in my hometown, which is definitely Phillies country. So you can probably guess who my favorite player was...

I have some good Cal memorabilia...an autographed 1995 O's media guide that he signed in Toronto, a few posters and a framed one of his two MVP years in my mancave downstairs, and an autographed book and a photo of me with Cal from the World Affairs Council where he was giving a speech. Totally cool guy, I had bandages on my hand from a softball injury, and the photographer initially made me hide my hand. Cal told him to take another one with the bandaged hand in the photo...I guess he was impressed that I still threw the guy out at first base after getting nailed!

The speech was great too, he comes from that pedigree that knows the game of baseball and how it's supposed to be played. Most people don't realize it but his father had a LOT to do with the Orioles success of the 70s and early 80s, the team excelled at fundamentals and Cal was a minor league coach who drilled that into them. And Cal Jr. was one of the best at positioning...so many times I'd see a ball get hit almost up the middle and he'd be standing right there. Easy out.

Loved watching Ripken play and I miss it. It seemed for a while like he hit a home run every time I saw him, even in Cleveland and Toronto! And breaking Gehrig's record, of course, was awesome. I did an essay about that in my college writing class and my instructor--a baseball fan--just went nuts over it.

So it's especially cool that a San Francisco fan appreciates the Iron Man...feel free to send me a photo of the "shrine!"

Hahaha! Ok, Kurt, you got me on that one! But, I'm around a bunch of Dodger fans that don't want to admit their admiration of my ticket - haha! But, as I continued to eye my collection, I have secured a few autographs over the years on various items and those hold great memories for me. I went to the Fresno Grizzlies Hot Stove dinner a couple of years ago and Will Clark was supposed to attend but was grounded in Texas due to snow. Who did they secure in his place? SERGIO ROMO! Aye Papi! Hahaha! He is such a fun person with an amazing personality. I have his autograph on my Hot Stove ticket - it's my version of Willy Wonka's golden ticket! lol!

What I do have in my collection that throws people off is my mini Cal Ripken, Jr shrine! Back in April 1985 he was featured on the cover of GQ Magazine. I bought the magazine (because of those beautiful blue eyes! hehe) not knowing who Cal was at that time. The article written by Thomas Boswell was about Cal being the best baseball player ever and projected the records he would break!

My mother cursed me because I started following the Orioles. I told her, "Hey, both teams are black and orange. Both teams on losing. It's just that one team is on the west coast and the other is on the east!" She didn't think I was very funny. But over the years, she too fell in love with Cal! I have tons of his baseball cards displayed and that GQ Magazine. The year of 2131, Oakland was even selling Baltimore items and my children surprised me with a cap and a 2131 commemorative baseball - those are pure treasures to me.

I went to see Cal every year when they played the A's. I cheered Cal on. One time a man said to my husband, "Can't you shut her up?," to which he replied, "Does it look like it?" Hahahaha! I knew every time that home run was about to happen. His body would stretch and straighten out and I'd tell my children - "Watch! Here comes a home run!" And sure enough, it was. At the last game he played in Oakland, I finally took my magazine hoping he might sign it. Tons of people were there with all of this 2131 stuff. Some guy asked me what I had, looking at my magazine like it was inferior. I said it was the 1985 GQ will Cal on the cover. Of course, I was told Cal was not on the cover to which I turned my magazine just enough so they could see but still holding onto it very tightly! The guy yelled, "Hey, let her down in front! She's a real fan!" As I understood it, Cal didn't like signing autographs in Oakland and he never came out. I tried to go around back but he had left the game early that day.

So, long story but there is no one item that I pick up - however I have ended up with them, the story is greater than the item. 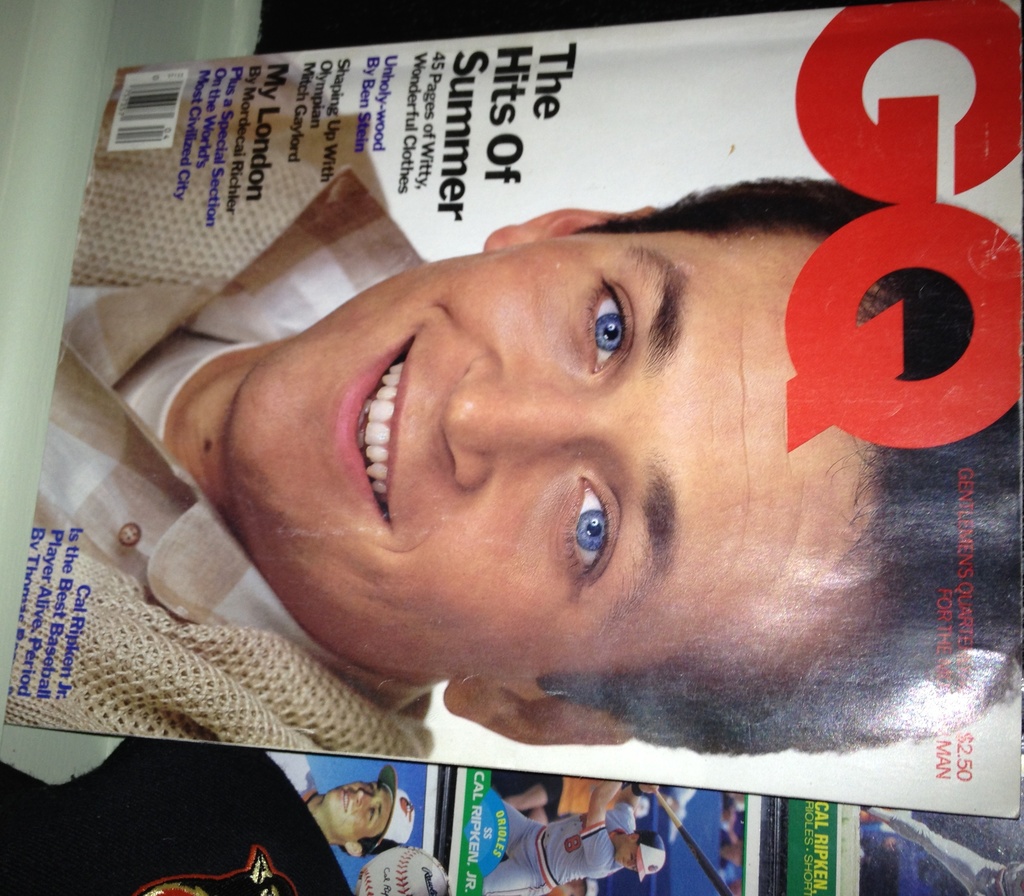 Cathy, Cathy, Cathy...you don't think a framed program and ticket from a perfect game is unique? Not too many of us have those! :-)

Comment by Cathy Zavala on June 20, 2013 at 9:25pm
I think a lot of the teams have the baseball bead necklaces with their team colors. I have a unique household. Some of us are Giants fans & some of us are Dodgers fans! I have a built in hutch that I repainted and found cool bat/ball door handles. Half is filled with memorabilia from Dodgers games & half from Giants games. There are many promotional giveaway items. I forgot about mentioning mini baseball bats. We pick those up as well. I would say the conversation started is the mini statue from Willie Mays 80th birthday party at AT&T park. I have several bobble heads as well. We were very lucky to have been in attendance at Matt Cain's perfect game last year & I have the ticket & program framed from that game.

But nothing super unique that makes people say Ooooo.

On a side note, I do make baseball wreaths from real baseballs and the mini bats. I'll post a picture of one. :)

I always try to get pictures or videos of the parks. But sometimes in the digital age batteries die or your card if full etc.

I know at one time one of the stores in Downtown Disney in Orlando use to personalize logo balls which I think is an awesome idea at ballparks.

Mark, my son and I used to get hats at each park but that gets expensive quick if you have to buy two.

Cathy, the jewelry question is puzzling. Not sure if its a popular selling item but I know stores sell small items like earrings, etc.

Stuff mascots. That's interesting. Somehow I don't know if a stuffed Yankee would go over in my house.

I agree on the ticket stubs. I wish there were more opportunities for hard tickets rather than computer printouts.

Programs are an excellent idea because there's probably a few of us who wished we had some dated programs from the Golden Era of baseball.

Keychains always have a place in mind and so do foam fingers.

With all this, is or are there items that hold a place on your collection shelf or box that serve as a conversation piece? My own is getting a game used ball thrown to us my Carlos Pena of the Rays during Target Field's first year. It has the stamp of Target Field on it. My son's is a game used ball during Spring Training signed by Ryan Howard.

I purchase a program/scorecard and save the ticket stub. I used to try to get the local newspaper and cut out and save the writeup of the game I saw, but often the morning papers don't have a report of a late-running night game, so now I just print out a report and box score from the website of the local paper. More convenient and cheaper. Don't care a whit about souvenirs that end up taking up space and gathering dust.