OTHER SPORTS TRIPS YOU'VE TAKEN AND WANT TO TAKE ?

Hey all. With baseball season over I wouldn't think that any of you have nothing to fill between now and April. And I am pretty sure that many of you are fans of other sports too. I am also sure that some, or perhaps many of you have or will be traveling to other sporting events too in the time between now and Opening Day 2011. As for me, I'll be going to a few L.A. Kings games here and there, and perhaps a Clippers game too. As for a Laker game, I bleed Purple and Gold, but tickets are just beyond my budget and I havent seen a Laker game live since 2001. Besides, something about Laker crowds at Staples Center that just turn me off ( Not all of us here in L.A. are the pretentious types....)

OK, to start this topic off, today, I will cover NFL stadiums I've visited

From 2005 to 2008 I would make at least 1 trip up north to catch a Niner game but the last couple of years the budget hasnt quite allowed me to take an additional road trip after baseball season. 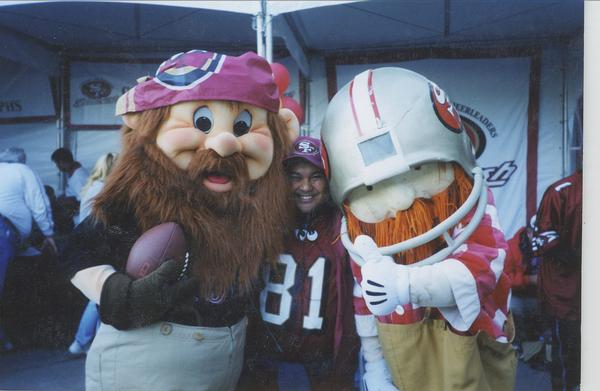 Candlestick certainly shows it's age, and upon entering the 'Stick, by looking at it's shape you can tell that it was originally designed for baseball. That's not to say that you wont get a memorable football experience here. Sure it doesnt have the modern conveniences of , say, Heinz Field ( which I'll cover next ) but if you're just here to watch the Niners on a Sunday afternoon, you'll be more than satisfied. The crowds at Candlestick have actually been somewhat boistrous as of late, and yeah, you still have your stereotypical wine and cheese crowds, but if you want to hang with a younger and more active crowd, you'll find that set in the north end zone seating. Someday the 49ERS will return to it's glory. 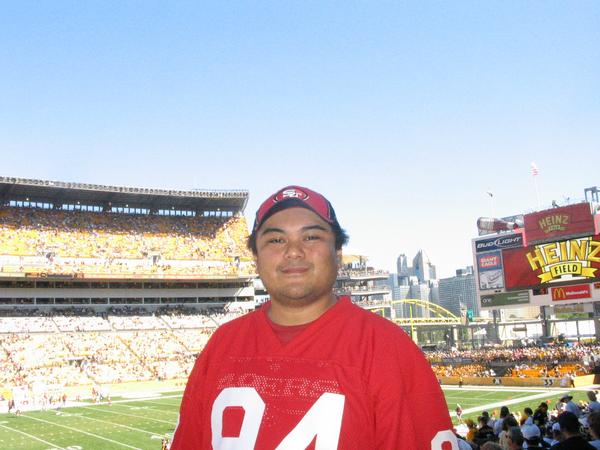 Somewhere in one of my blogs I may have mentioned that Pittsburgh is a football town. And they arent shy when it comes to showing their passion for the Black and Gold ( It seems everything in this city is Black and Gold ). I came here to see my Niners do battle with the Steelers amongst 65,000 Terrible Towel waving fans, and I tell you, I came away impressed. Steelers fans, as passionate as they are for their home team, we're just as respectable towards me and after the game one even bought me a few Iron City Brews at Primanti Brothers ( A local eatery ). Oh yeah, as for those Terrible Towels, Steeler fan or not, if you're like me and like to take home a souveneir from each of your sports themed trips, than you gotta take home one of those Terrible Towels, which , are a suprisingly low $7 ( At least when I went )

My first NFL game and what a way to kick off, no pun intended, my senior year in HS. This would also be the game which my uncle, who took me, would introduce me to the world of Tailgating. If only Food Network was around back then. As for me wearing my Niner Red colors amongst the Silver and Black, there was plenty of Red en masse that day. Too bad it ended in a 12-6 Raider victory. Great time at my first NFL game.

Monday night football. Unfotunately, the game which Steve Young was knocked unconcious thus, ultimately, ending his career. One of the loudest football venues I've ever been too. As for the fans, I dont know if I should lump the ASU students into this, but at a prior UCLA-ASU football game at the Rose Bowl in '96, they didnt exactly give true meaning to the word class. And they didnt seem to be no different in '99 either. Upon being yelled at, I dont think they we're too happy when I yelled back " NINERS AND UofA, BEAR DOWN !!! "

OK, so those are my NFL venues visited. As for other venues I'd like to see a game, especially a Niner game, three I can think of right now

3. Cowboy Stadium
Oh to wear my Niner colors in Dallas...

What are your NFL, or other sports trave stories ?

Comment by Kurt Smith on February 5, 2011 at 2:00pm
I've gone to a few other hockey arenas, like Nassau Coliseum and the old Meadowlands Arena in North Jersey. They've been replaced so I will unfortunately never get a chance to see a game at Maple Leaf Gardens in Toronto or the Forum in Montreal. I would definitely like to do a Canadian hockey arena tour someday.

Comment by Dre Diaz on November 24, 2010 at 4:46pm
Nice Meg. One thing I've always wanted to do is see an NHL game in Canada, especially in Toronto and Montreal

I watch and visit hockey arenas in the fall/winter. Meg's hockey site

Just this past month I went to my first NBA game and loved it. Will try to attend another one locally - Nuggets. Prices are a bit out of my range but I've discovered a few deals to make it more affordable.