Since we all have the passion for going to baseball stadiums all over this great country, it got me thinking a little bit: When we signed up one question was, what is your favorite stadium?

For me, my least favorite stadium as the old Atlanta Fulton County Stadium. It was horrible. Food was awful and you had the sorest of rear ends when you went. I guess the least favorite current one is the Metrodome.

The stadium with the best food, and maybe I'm a little biased is Turner Field. Wide variety of foods and aside from the cheesesteak, nothing on the menu I ever had was bad.

The surprising stadium for me was Tropicana Field. I heard horror stories about it being a dump and such, but other than being slightly cramped and having a slanted exterior view, it was nice watching a game there. And the AC beats the humid Tampa heat.

The disappointing stadium for me was Minute Maid Park. It was more pricey than a regular stadium I thought and the food was disappointing as well. Also, should there be a long wait line for men's bathrooms? PS-if you go, avoid the right field seats (upper and lower levels). Your view isn't as good as say anything on the left-field side.

The stadium I would love to go back again and again if I lived near there would be Camden Yards. Awesome stadium!

The stadium I would love to go back in time to watch a game would be Ebbetts Field.

How about you guys?

Comment by Steph (16+5) on July 22, 2008 at 6:26pm
Sad to say, but the Metrodome (my home park) is among my least favorite around. The place was built for football; sit anywhere down the 3rd base/left field line and you'll be craning your neck to see what's going on at home plate. I rarely attended games there until the last few years, preferring instead to revel in memories of the old Metropolitan Stadium in Bloomington, MN (the site is now home to the Mall of America). While the Met wasn't a classic ballpark by any means, it was great on a summer day, and it was fun to sip hot chocolate there on a cold spring or fall day. I'm hoping the Twins' new ballpark will re-awaken some of those Met Stadium memories -- although as we waited in the snow to get into the home opener this year, I wondered how practical an open-air stadium in Minnesota really is.

Comment by Christina (8) on July 19, 2008 at 8:51pm
It makes me sad too, for some reason I can't quite explain. Thank you. (I know this is random, but we bought a way better camera today, so next year in Boston there will be awesome pictures to come!)

Comment by Tim on July 19, 2008 at 8:23pm
No probs. It saddens me to see the stadium in that shape, but you took the picture and it's a great picture. The majority of us never saw it.

Comment by Tim on July 19, 2008 at 7:22am
I am looking forward to the new Twins stadium in Minnesota as well Steve, but I'm very surprised they aren't putting a retractable roof up there, meaning playing at that stadium in April will be murder.

As for Christina, the picture bums me out. It looks dead and in fact there's a giant hole now where the left-center wall is at Tiger Stadium 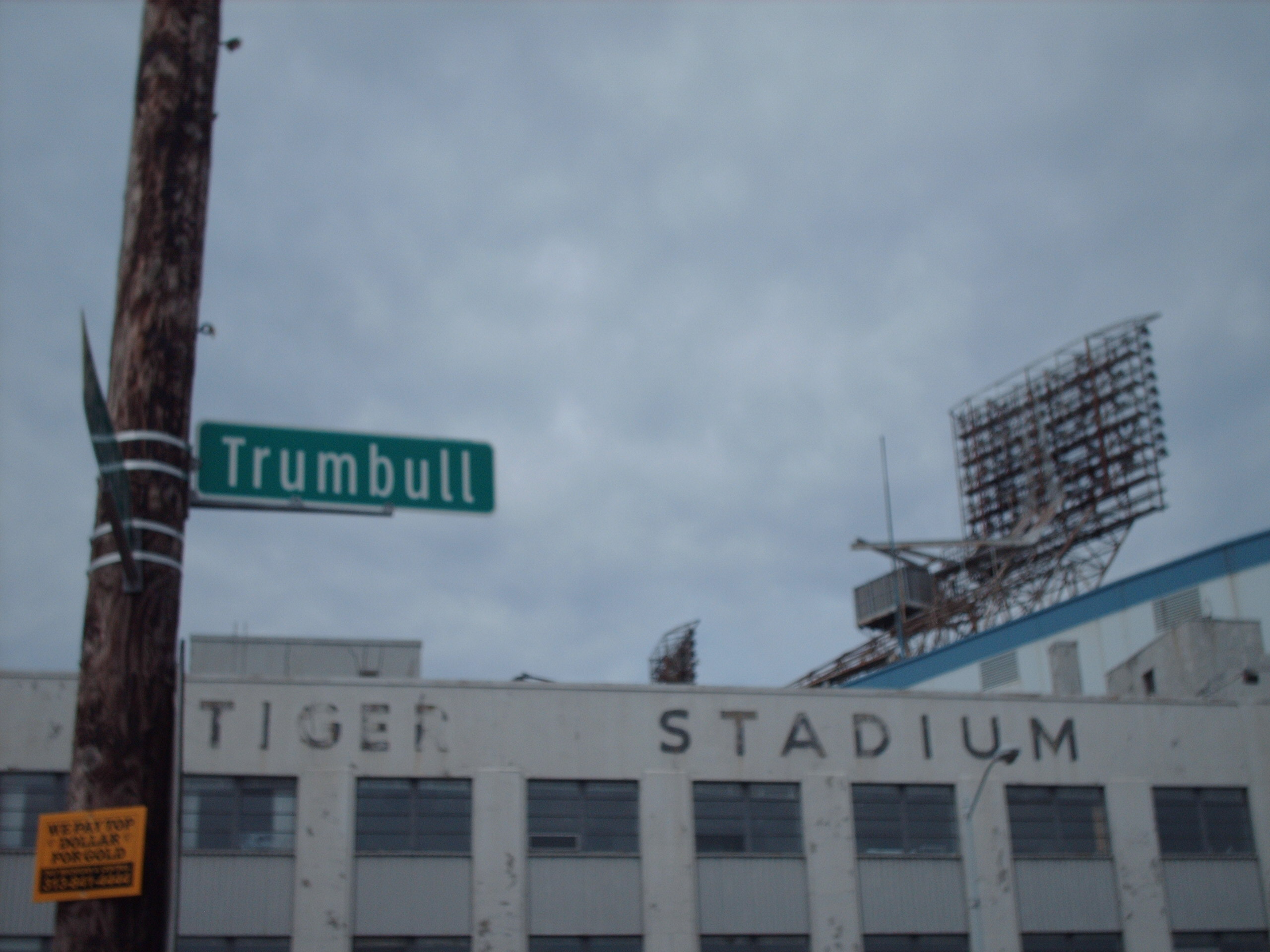 I forgot if I could go to any stadium back in time, I would go to Tiger Stadium. At least I got to see it, before the tore a lot of it down.

Comment by SteveHarvill(30/43) on July 18, 2008 at 4:40pm
Well my least favorite is the big basement with the green floor in Minnesota (aka Metrodome) I can't wait for the new park there in a couple of years. RFK runs a close second. It is kinda tough to pick out the best food. I have to agree with Craig and Ken about the selection at Safeco...Citizens Park seemed to have lots of choices too.One things that stands out for me is the intoxicating smell of the garlic fries in AT&T (or whatever its called now) in SF. My most surprising stadium was US Cellular Field. I was first there when it was still known as Comiskey and it was nothing special for a brand new park, but the renovations they made really improved the look of the park.
As for the biggest disappointment that is easy...Dodger Stadium. The only good thing about the park was the view. I have to laugh about Kens comment about PNC, although i do like the park...I did the same thing that he did plus i was carrying 2 full beers(well thats what i started with)! The park i would like to return to is Miller Park. It seemed like everyone was having fun and were friendly(maybe its the beer),and the food and beer selection was good.

Comment by Ken Lee (30/43) on July 17, 2008 at 9:26pm
Gotta disagree with you Josh on PNC... while it's a great venue, the view is amazing, but they didn't get "everything" right with PNC. My biggest beef about the park is how you cant just do a loop around the park on a "main concourse" that easy. As a matter of fact, to get from the outfield seats to the concourse that runs from pole to pole, I couldn't even find an usher there on my first trip that could tell me how to do it... let alone find our seats on the scoreboard porch (we ended up snagging some bleacher seats in left... got kick out of the section a couple times, but finally managed to retain seats for the majority of the game). I just happen to think that its the park that is the hardest to navigate out of the entire MLB.

Comment by Thirty26(42) on July 17, 2008 at 6:28pm
My favorite park other than Yankee Stadium is PNC Park in Pittsburgh. They got everything right with that place. The 6th street bridge stands majestically beyond the centerfield wall. It's too bad the team has never been worthy of playing there.

My least favorite stadium is Dolphin Stadium in Miami. First of all, it's a football stadium. Second, there's no character and little reference to the fact that a baseball team actually plays there.

The best food and drink is Miller Park in Milwaukee. They know how to tailgate there better than anyone!

The most surprising stadium to me is the Rogers Centre in Toronto, Ontario. From the outside, it looks bland and boring but with the roof open and the CN Tower hovering above, it gives it an added dimension most fields can't boast about.

I wish I could have seen the first game ever played at the Old Yankee Stadium.

worst food- that's a tough one but i will have to say Yankee stadium. i usually bring my own. not worth the prices.

most surprising- i would say U.S. Cellular field. not as bad as i heard t would be.

i wish i could have seen a game at the old Tiger Stadium.