Hang your ballpark photos up

I don't know how many people do this. I used to have photos from every major league ballpark I'd been to (unfortunately I don't have any from Baltimore's old Memorial Stadium...sniff) on display on my cube at work. Talk about a conversation piece...I've had people be just in awe of that. "***in' awesome", one co-worker told me.

I've since arranged them on posterboards and then frame them, with the ticket stub from each game under the ballpark. I have three framed posters, one for each league and one for parks that don't exist anymore. So in my home I have a constant reminder that I still have...let me turn around for a sec...12 more to go, seven National League and five American League. I'm going to Nationals Park this year and hopefully the new Yankee Stadium (Target in Minnesota is a long shot but I may try), but I'm not going to Miami until they get a new one.

Kurt, what does your setup look like? Got any pics?

Comment by Doug Miller (30) on January 30, 2010 at 2:51pm
It's always fun sharing ideas, it's not bragging. My wife bought me a US map and some tacks a few years back to keep track of my travels. I do a full size tacks with the logo for the majors and use a small blue-head pin for the minors. Here's a shot of it.

Comment by Kurt Smith on January 29, 2010 at 6:09pm
Hope this post didn't sound like I was bragging, I really don't touch a lot of you here.

The only existing hockey arenas I've been to are Wachovia in Philly and Nassau Coliseum in Long Island. I went to the Spectrum a lot, and the Meadowlands Arena which I think is gone now. Pretty pathetic...I need to work on that.

I, too, do posterboards of stadiums I visit (lapel pins on index cards with date, league, teams, etc). Let's see if I can show you a photo to see if it's similiar to what you do. 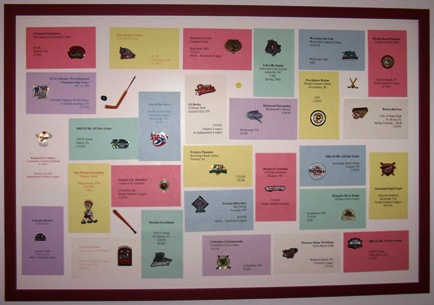 I have two maps of the US (I think I posted photos of one of them somewhere - maybe a discussion - on this site, this evening) with lapel pins in them.