Glad to see there's a whole site for ballpark enthusiasts! My friends are going to travel, by car only, to all 30 ballparks in 30 days, and make a documentary about the whole thing. They leave in mid April, and the first game they are going to is at the new Citi Field. Much of the money they raise from the DVD will go to The Boys and Girls Club of American. Check out the website:

My Trip to Nationals Park

It was a Saturday afternoon, and I was in Greenbelt, Maryland on some business that never took place, due to circumstances that were apparently way beyond my control. So, with my business plans for the day up in smoke, I decided to take the rest of the day, and go sightseeing. One of the places I knew that I wanted to go was to Nationals Park, being that Washington, D.C. was only 15 minutes from where I was in Greenbelt. So, off I went to see one of the newer ballparks in MLB, at the tender age… Continue 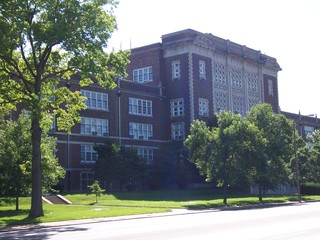 Robison Field was the home of the St. Louis Cardinals from 1893-1920. The site is just a few blocks from where Sportsman's Park (there four on the same site) was located at and sits just a couple miles north of downtown St. Louis. On the site today is Beaumont High School (pictured).

I was recently in Indianapolis… Continue

Hey all you ballpark chasers.

A little over 2 weeks until the Cubs start our 101st attempt at winning our next championship.

This summer I am going to attempt to see a game in all 30 stadiums. I have published a website for the Quest - 30ballparks-in-1season.com. Please check it out - I am working on a links page on the site and will reference this site for everyone to register.

Today is the last day to register for a chance at pre-season and opening day tickets at the new Yankee stadium. I am sure I wont win but its worth a shot.