Just to show you how underrated Jamie Moyer and Ichiro Suzuki are, I thought I would compile this list.


Jamie Moyer is also the 3rd winningest pitcher of all time over the age of 35. Only Warren… Continue

Chicago Cubs-WRIGLEY FIELD--1.7TH INNING STRETCH-made famous by Harry Caray and kept up by guests NOW. 2. They started throwing the 'opposition's' home runs back onto the field 3. They have their own song "GO CUBS GO" which they play after every win. 4. Of course they have the curse of the 'BILLY GOAT' and also have not won a World Series in 101 years

Houston Astros-Minute Maid Park. 1. They have a train that goes from side to side whenever they hit a… Continue

I have started to collect all the evidence in the forms of pics and video's. I have posted some pics pf the streak at my webpage. www.myspace.com/30baseballgamesin26days ---It is in the 1st blog on the right hand side. I am going to add video's onto that page along with FACEBOOK. I only have pictures of the 2 new ballparks this year that i did not see last year to add to FACEBOOK. I have about 1500 total pics of the ballparks now.. I will post some new pics in here too. I will still finish the… Continue

This past Friday night I completed the 28th ballpark this season at Fenway. I only have 2 more to go which are Toronto and Citifield which I will get to in a few weeks. Unlike the amazing feat that Chuck Booth and the 30/30 guys did this summer - I decided to take all summer to complete my Quest of seeing all 30 in 1 season. The goal was to be complete by Labor Day so that if I had any rainouts along the way I had the whole month of September to work my back to that city and catch a game. To… Continue

Baseball Parks--Quirks and Rituals PART 1 (IF you have something to add please let me know about each ballpark.

Since I have begun to write a book on my experiences in chasing down the World Record by going to all the baseball parks, I decided to ask for help in my research. I have been to every ballpark for two years in a row, and am always fascinated by traditions and things each city does at a ballpark. LIke the 7th innins strectch is always sung from the media box at Wrigley..or… Continue

I have never actually sat down to rank my "Top 30" before, but here it is. These are based on everything that goes into going to a game, not just the park itself. It's the overall experience... As I See It :)

MLB Parks i have been to

Record Synopsis, list of the top 30 baseball parks the way I see it

I want to personally thank Ken Lee for all the hard work and diligent writing he added to the updates during the record chase. It has been an exhausting and rewarding record breaking trip. I am going to write a novel based on the chase and of the ballparks in general of "SURVIVAL GUIDE'. I am looking for people who have seen all the ballparks to help in a survey, so I can keep the rankings more neutral. Here is my top 30 ballparks that come from 7 key topics like, stadium… Continue

August 14
6:27pm (PST) - CONGRATS CHUCK BOOTH!! You are the World Record Holder!! With a walk-off HR by Brandon Inge in the bottom of the 9th, the game has ended in Detroit and thus Chuck has officially seen 30 games in 30 MLB parks in 24 days!!

Just got a call from Chuck, he is celebrating! What a way to end your World Record breaking trip with your 4th walk-off if the trip! He and 35,000+ Tiger fans got to see an awesome 2 hour and 20 minute game that… Continue 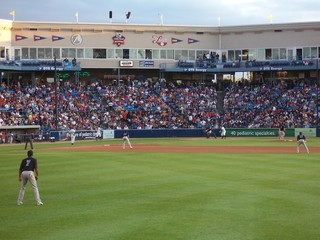 The last of my ballpark visits for work this year, Fifth Third Ballpark in Comstock Park, Michigan, home of the West Michigan Whitecaps (MWL affiliate of the Detroit Tigers). This year all of the attention at this ballpark has been on the 5,000 calorie Fifth Third Burger. You can check out my coverage of this ballpark… Continue

I'm not going to retype this but you can read about it over at my blog:

Photos from the trip will be over here shortly... 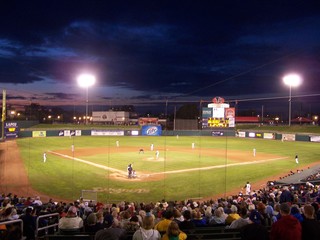 Oldsmobile Park in Lansing, Michigan is stop number seven on my tour for work this year. The ballpark is located in downtown Lansing, just a few blocks from the state capitol. The fountains and statues outside the park are very nice. The corners are short and include higher fences in those areas which is a little bit unique.… Continue

Hey all. In a few minutes, I will be off to Dodger Stadium with the little bro to celebrate our birthdays as we watch our Boys in Blue do battle with the Brewers. OK, the lil' bro aint so little anymore, he just turned 24. But hey, all you big bro's out there knows how it goes.... Anyways, as all you baseball fans know summer just isn't summer without baseball. Let me take you back to my first ballgame on my 8th birthday, August 5th, 1982. The Dodgers were in a tight NL West race with the… Continue

Like I have said a few different times before, a trip such as this magnitude can send you off on roller coasters of emotions. Sunday night at 9:00 PM EST I was driving back to the rental car outlet in Miami when a circus of events transpired that almost made me miss the nooner at the 'TROP' on Monday. 1st off my car rental did not have an interior light which made it hard to navigate the directions back to Miami Intl' airport. Some of you also may know that the car rental outlets for Miami are… Continue