Day Trip to Houston From NJ

Traveled to Houston yesterday to see the Yankees and Astros play their final game of the season. As usual used airline miles to make the trip in one day to avoid the hassles of baggage and overnight stays. Left Newark at 5:20 AM, was in Houston before 8, rented a car, and spent the morning visiting geographic highpoints (another hobby) in the area, Houston's highest natural elevation being an oxygen-deprived 280+ feet!

On Sunday 9/22/2013 my friend and I made a little road trip to visit Angels Stadium for the Mariners vs Angels game.

For being the 4th oldest ball park around, I have to give kudos to them, I feel the stadium is just beautiful.

Unfortunately the Angels lost that day, but it was a good time.…

Well my friends and I just made the down and back trip to see the Reds vs Pirates play. It's our goal to try to see one park per season with the Pirates being the away team. So far, so good. We were pleased to see numerous Pirates fans in attendance at GABP. The Reds fans were friendly to us, including several that welcomed us to their city. Being that I have been to PNC Park countless times, since I'm from Pittsburgh, GABP seemed to have a lot of similarity to PNC with the views of the…

Like the rest of you, I am a baseball junkie. I've was blessed with the 'diamond gene' and have spent over 35 years savoring every morsel of the game. After a career in the publishing business as a cartographer and graphic designer, I recently decided to create a bold project around my passion for the game.

The roots of the THIRTY81 Project go back several years, but it wasn't until this last spring — as the wave of stadium construction subsided and the recent realignment balanced…

Jeff and I chat about liking the Braves and Yankees. Mr. Thurn also gives his Favorite 9.
Checkout Jeff's show "OVERTIME" weekdays from 3-6pm cst on http://espn991.com/ 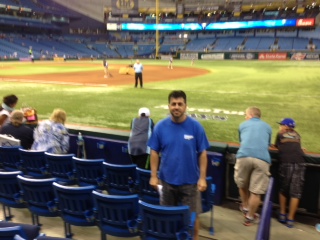 Artie Wilson Could Have Been So Much More

Arthur Lee Wilson was a superstar shortstop in the Negro leagues, mostly for the Birmingham Barons. He was an All-Star in four of his first five years in the Negro Leagues. A rookie named Jackie Robinson took the All-Star honors the only year Wilson wasn’t named to the team. In 1948 Wilson hit .402 for the Barons, seven years after “Teddy Ballgame” hit .406. Wilson was known for using the opposite field and his great speed.

While Wilson was hitting .379 in the Puerto Rican Winter…

Over the years, I have had the opportunity to take in a number of Cubs games from several of the rooftops that line Waveland to the north and Sheffield to the east, but it has been probably 10 years or more since the last time I had done so. In the late 1990s, the rooftops were businesses but not terribly sophisticated. They served canned beer from tubs of ice, had a couple of Weber grills used to prepare burgers and hot dogs and the seating was a set or two of rickety…

From Chicago, Indianapolis is the nearest AAA team and about a 3 hour drive. The first week the kids were off of school provided us the opportunity to drive in for an afternoon game against the Durham Bulls and be home before dark.

Victory Field was a beautiful park with a great view of the city skyline beyond the outfield. Our ticket agent for the day of game sales set us up with some seats in the shade on the third base side of home plate.…

Our 2013 Baseball Trip to Washington and Baltimore

Our 2013 baseball trip took us to Washington to see the Nationals and Baltimore to see the Orioles.

We enjoyed a couple of beautiful days in Washington and on our first morning did a walking tour to see the White House, National Mall and to visit the Air and Space Museum on the Smithsonian campus. Unfortunately, some idiots had thrown paint all over the Lincoln Memorial and it was closed for cleaning the morning we visited so we were not able to get very close to Lincoln’s statue. We…

Travis and I chat about his company's rise and he gives us his Favorite 9:

I have loved me some real baseball experiences. Top ones not in order because you can't order them are:

Bill and I chat about Indy Baseball and about his crazy road to Laredo. Bill Also gives us his favorite 9.

Hey guys I am brand new to the site and am really liking what I am seeing. I am new to the ballpark chasing scene as I am only 19 years old, but am looking to up my game in 2014. I live in Louisville, Kentucky where there isn't a major league park so my first option is always Cincinnati and Great American Ball Park. I have now been to 4 ballparks after seeing Busch Stadium for the first time at the end of August. I am planning my trips for next season and am looking for help to make these…

My Take on PNC Park

I think anybody who has chased ballparks and has been to Pittsburgh can put PNC Park as the best park to go to if not one of the best (possible top 3) for ballparks in the Majors. For me, while I loved my experience at PNC Park and would happily go there again, I'd probably put a few others just slightly ahead of PNC (not much). While I think the structure of PNC Park itself was magnificent and probably the best I've seen, there were only a couple of things I would change about the…

Chris Iles (pictured) and I discuss the Twins from his perspective as the Senior Manager of Corporate Communications. Mr. Iles drops his favorite 9 as well.
Travis Kriens gives us the lowdown on all the shows at…