Here is the official streak schedule for my attempt at breaking my own Guinness World Record.  In addition to hosting a 93 article series at www.fastestthirtyballgames3021.wordpress.com, 50 of the articles will be posted at http://mlbreports.com/gwr-tracker/ and at the main page of www.mlbreports.com on Mondays and…

Just returned from my trip to see the A's vs. M's at the Tokyo Dome.  Flew out of Newark late morning on Tuesday, arrived Tokyo after 14-hour flight the next afternoon without seeing a night.  Checked into a hotel near the Narita Airport and immediately headed for Tokyo, some 40 miles away, by train(s). Getting off the train and walking to the Dome with the excited baseball crowd felt completely familiar, except that everyone was Japanese and the sign on the ballpark read, "TOKYO…

So I'm sitting here kind of half-watching The Rookie.  Disney's making it's pitch for a heartwarming tear-jerker when it hits me:  I wonder how much better Field Of Dreams would have been with Dennis Quaid in it.  Don't get me wrong, I love Field Of Dreams.  It's a great movie for a lot of reasons, but think about it for a minute.  Would it have been even better with Dennis Quaid?  Watch The Rookie, fast forward it if you want, but stop at the scene when Morris gets called up.  Take that…

When I go to Cleveland I will be shown around by Matt Van Wormer who writes for www.didthetribewinlastnight.com. We will be eating lunch before the game a restaurant that was featured on Man Vs Food, arriving at the park a few hours before game time to check things out, and sitting in the “Social Media Suite”. It’s shaping up to be an amazing once in a lifetime experience. I will tell you all about it once I am in… While sitting at my house, I was looking at all the stuff that I had accumulated over the years.  It is amazing how we buy things just to buy them.  The stuff sits in our houses collecting dust.  While our dreams of a life we always wanted wait until one day when the kids get out of school, our nation elects a new president, or the years we retire.  But many people forget…

EDIT:  Talked to the Boss this morning... I **AM** going to New Mexico and he agreed to the timing of August 20-24 for me to be working there!  So, it's OFFICIAL, I *AM* gonna make a run at all 30 this season!  Now I just need Chuck's schedule to go smoothly, or for him to have make up games where I need to pick up games as well and all will be golden!

In addition to going out on the road with Chuck Booth next month, I have a possibility…

So I still need to update my 10 stadium summer tour from 2010, but I'm on a 5 stadium Grapefruit League tour right now. Went to Hammond Field on Monday to see the Rays and Twins, and JetBlue at Fenway South on Tuesday to see the Rays and Sox. Going to Roger Dean today to watch the Tigers and Cards. Been fun so far.

The One, The Only: Chuck Booth

When I first thought about chasing this dream I did a Google search for ball park guides.  I stumbled across www.ballparkchasers.com.  I joined the site and sent a message to Craig B. Landgren who runs the site.  I asked him for any tips that he may have that would be helpful in my journey.  He told me of a book he helped contribute to called the The Fastest Thirty Ballgames: A Ballpark Chasers World Record Story By Douglas “Chuck” Booth. …

Going to a lot of games this year

Will be going to a game at Fenway Park this year.  Living in CT gives me a lot of chances to go and with it being the 100th anniversary, its a must. Will also go to a few games at Citi Field (my favorite of the 2 in NY) and probably a game at Corporate World (Yankee Stadium).  As much as I like the stadium, its too expensive and too flash.

I am heading to FL in June and will be going to a Red Sox @ Marlins game for the new Stadium.  I am down to 9 stadiums remaining. But have…

Before Christmas, I joined Ballpark chasers to get advice on ticket sizes for the MLB tickets. My boyfriend has been to 13 and plans to travel to all 30. As a gift, I tried to find a display case specifically for this purpose and sadly found nothing. As a graphic designer, I put my skills to use to create a poster for him to adhere his tickets to as he collects. I was asked to share the final poster when completed so here is a low-res jpeg.

Since my boyfriend is a Red Sox…

Inside Fenway Park: An Icon at 100

Craig's status update inspired me to look into PBS' documentary about Fenway Park. Although I am a die hard Yankees fan until I die, it still looks like a great documentary. Thought I would share the preview...…

A little appetizer to get you fired up for the opener in Miami. 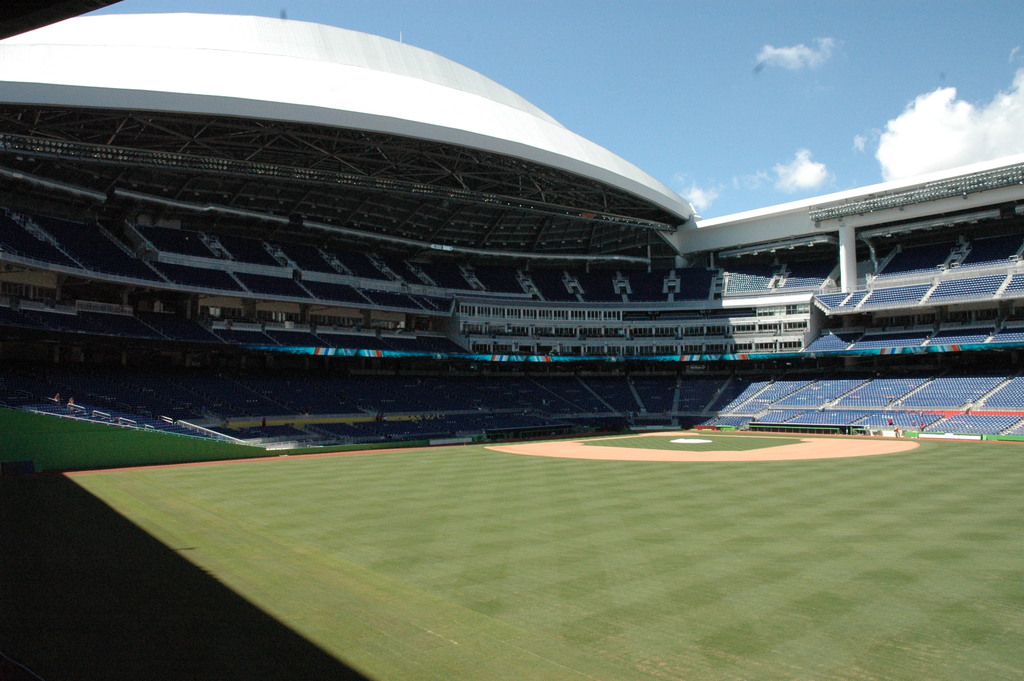 Just added a bunch of Pics on my page of the new Miami Marlins ballpark.

I am going to be to games in Washington, Baltimore, Philly, and Pittsburgh.  As part of my quest to hit every stadium, one of the things I am doing is trying to eat the ballpark favorite/signature foods at each one.  Anybody who has any suggestions for what I must eat while I'm there would be great.  I will take any suggestions for the other parks as well for when I get ready to go to the other stadiums.

So I've been tossing around a few ideas for possible other trips this summer but so far we have one trip planned.

I'm looking at a possible trip in July to Washington D.C. as well as possibly a trip to Florida in September. I only have…

What are some good iPhone apps?  I’m looking for good travel and restaurant apps.  I currently have “groupon”, “Orbitz Hotels”, “Hotel Tonight” “Hotels.com”, “Stubhub”, “Fastfood”.  If you have an iPhone I also recommend the “Viggle” app.  It’s this app where you tap the screen and it listens to whatever tv show you’re watching and gives you point for “checking in”.  You can redeem these point for giftcards for websites such as Amazon, iTunes, and Travelocity.  I’m saving all my points up…

I decided to give the donation idea a try.  I'm not expecting much but if you dont try then you'll never know, right?  If you would like to donate to make the trip a little easier on my pocketbook go to this link http://www.gofundme.com/h8blk

The plan is to visit some of the east coast stadiums this year in June::::

Also some minor league games along the way::::

Does anybody out there still collect baseball cards?  My grandfather collected baseball cards for me and my cousins.  He started from our birth year until he passed away.  For me he started in 1985.  It was when baseball cards were produced like crazy.  To my knowledge there are not too many “rare” cards from the late 1980’s.  I collected cards on my own when I was a kid as well.  Every once in a while my dad would give me some money and take me to the card shop and I would buy as many packs…

Im coming over from England in a couple of weeks to continue my quest to watch in game in all the stadiums, Im up to 17 now. Are any ballpark chasers gonna be at the Marlins-Yankees game on April 2 or Pirates-Phillies Opening game on April 5, and Reds-Marlins game on April 7 and wanna say hi? I'll also be at the 2 Mets-Yankees Spring Training games on April 3 and 5 too

I decided to go out to Chicago on the weekend of March 10th-11th.  I wanted to go for the entire weekend but I had a previous engagement for that Friday the 9th.  I had never been on a commuter train before so I decided to take the Amtrak from Ann Arbor to Chicago.  Round trip the ticket cost me about $70.  At first I was I thought it was pretty cool to be on a train.  The only trains I had been on before were subway cars in NYC, Washington DC, and…