Tips for Cleveland and Pittsburgh

I have tentative plans to go to the new Yankee Stadium on May 5th, provided my boss lets me have the day off and my wife doesn't notice.

Being a New Jersey native my whole life, I've learned to find ways to beat a system that is designed to be unbeatable, that being avoiding any extra charges for tolls and parking that can be avoided without a great deal of effort.

I state in my Yankee Stadium Guide (to be… Continue

I saw the Indians hammer the Twins at Target Field yesterday (4/22). I sat nine rows up in the top deck ("Home Plate View") almost behind home plate, but did not seem so far above the action as in other stadiums, e.g. in a similar location in Yankee Stadium. The scoreboards and large replay board are modest by current standards, but very nice nonetheless. Chow is OK and average-priced. There are great views of downtown from most seats, and in general the park has a very good feel about it. Fans… Continue

There is one thing you can say about Yankees fans; they have a lot of passion for their team. I have been to the new and old Yankee Stadium before but I never paid as much attention to the fans as I did this past Saturday. I must have counted a least 20 fans sporting Yankee tattoos in the time it took me to get into the stadium. I have a hard time imagining that there is anything walking around with the Nationals curly W tattooed on their body, that kind of passion doesn’t exist in this city… Continue

I have never been to games in Det or Cincy - any suggestions? 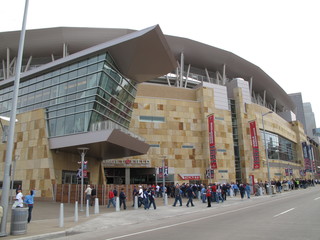 (Click here to view my Target Field Photos). Finally. An effort that began in 1994 was capped Monday, April 12, 2010, at Target Field as the new ballpark on the westside of downtown Minneapolis opened for the Twins first official game. Through the years there were many… Continue

My Take on Rangers Ballpark in Arlington

Just got back from my trip to Dallas and caught two Rangers/Blue Jays games there. Rangers Ballpark in Arlington was definitely a great stadium. It was big but had a homely feel to it. It was clean, and it was baseball, Texas-style.

In terms of the stadiums I've been to, Rangers Ballpark in Arlington is one of my favorites and there were so many good things about it. That being said, there were some things I DIDN'T like about it. Notably the scoreboard and that anything on the right… Continue

A Birthday Gift From The Orioles (from the Ballpark Insider blog)

Next Tuesday, I will be going somewhere I haven't been to in almost nine years--I will be attending a baseball game at Oriole Park at Camden Yards.

I won't go into detail, but when Cal Ripken Jr. retired, it kind of ended things for me as an Orioles fan. Once Cal was gone, it was as if the last link to their great past was severed. I guess I picked a good time to bail out, since the team has been painfully bad for years. I don't know if I could have handled a 30-3 drubbing at home.… Continue

**Additional discounts may be available via other providers, but these were the only ones I heard about.

There is a week in June where you could plan a very nice California Ballparks Trip, especially if you are an Angels fan. You start in the Bay Area and end up in San Diego. Very efficient trip with plenty of time to travel and 2 days in Bay Area and LA area

If anyone is looking for tickets to the TORONTO BLUE JAYS let me know--I can save you 50% of the price you would normally pay. We have this thing called AIRMILES up here that lets you cash them in for ticket vouchers. The vouchers are good for any game in the season(based on availability--but seriously Toronto hardly sells many tickes anyway). Vouchers do have to be redeemed at GATE 9 OF SKYDOME in person-but I will sell them real cheap to fellow 'chasers'.

Baseball's back/Its going to be different for me

This year will be a considerable let down after I visited all 30 parks in 2008 and broke the world record by doing it again 24 days in 2009. There is no real big road trip planned thanks to some new ownership at my job and a falling off of earnings. I will still see games in Colorado, San Diego, the new ball park in Minny and may get another chance to see YANKEE STADIUM. I will take in about 6 games at SAFECO FIELD(which is only a 2 1/2 hour drive for me). That is the bad news(sort… Continue

I have only been to one minor league park, Weurfel Park in my home town of Traverse City, MI. That will all change this year as I plan to go to each of the 15 parks in the states of Illinois & Indiana. I'm really excited about Bosse Field in Evansville, IN. I just learned that its the 3 rd oldest ballpark in the country, and also was the site for a lot of the filming of A League of Their Own. Does anyone have any additional suggestions for my trips?

Game 1: The Magic of Opening Day.

Well, nothing says opening day like metal detectors and pat downs. With the President in attendance the lines were a little longer and Eric and I barely made it in before the first pitch but it was great. Opening Day in baseball is a wonderful time of the year, when hope springs eternal and every team still has a chance. The weather was perfect too, God must be a baseball fan.

We don't get too many sellouts at Nats Park, so it was a great feeling because the place was packed. The sad… Continue

Beating The Obstructed View At Fenway

Fenway was built in the early 1900s, when baseball owners tended to not give much of a whit about fan comfort or views. The goal then was to pack as many butts into the place as possible (as opposed to today, when the goal is to get the most cash out of each butt), and Fenway was clearly… Continue

It has been a while but when the season is over I kinda go into hibernating on here so my apologies to my friends who think I dropped off the face of the earth. That and it drives me bonkers seeing pictures of stadiums before the season starts and I can't go anywhere for months because baseball season isn't around.

Well, it is back and I can't wait.

I saw the recent blog of 2010 Predictions and I'll go with mine. Mine might be skewered, but still...my predictions are my… Continue

And a target of critics it will… Continue

Can't wait for baseball season to begin. I've drafted teams in 4 different fantasy leagues and looking for to the action beginning Sunday night. Time to publish my predictions: